Basseterre, St. Kitts, April 29, 2016 (SKNIS): On Saturday 23rd April, 2016, nationals of the Federation of St. Kitts and Nevis residing in the New York area flocked into the Crawford United Methodist Church in the Bronx as Prime Minister the Honourable Dr. Timothy S. Harris, Deputy Prime Minster, the Honourable Shawn K. Richards and Director of the Department of People’s Empowerment, Mr. Duncan Wattley, provided nationals with an update on the progress and challenges of the Team Unity Government since assuming office in February of 2015.

Mr. Wattley, the Director of the Department of Peoples Empowerment, took the opportunity to introduce himself and his office to the nationals who attended Saturday’s town hall meeting. Given his responsibility to serve nationals living in the Diaspora, Mr. Wattley spoke to the importance of ensuring the lines of communication are open in an attempt to foster meaningful dialogue between the citizens living abroad and the Government. The Director of this relatively new Department impressed upon the large and enthusiastic gathering that he strongly believes the Diaspora community has a significant role to play in nation building.

Wattley also stressed that it is time for the people of the Federation to allow the so called “Brain Drain” phenomenon to work in the nation’s favor by tapping some of these great minds currently living overseas to contribute to national development, despite the barrier of distance. Wattley sees a meaningful resource base in the alliances between nationals abroad and those residing in the Federation and he deems positive collaborations among nationals as imperative in the quest to move the nation forward. Mr. Wattley challenged nationals in attendance to put their differences aside and work together for the betterment of the Federation of St. Kitts and Nevis.

Deputy Prime Minister and Minister with responsibility for Education, Sports, Youth and Culture, the Honorable Shawn Richards, used the opportunity to give an overview of the many achievements of the very young fourteen (14) month old Government. He spoke of the removal of VAT on food and funeral expenses and the relief this decision has brought to many families. Minister Richards also briefly discussed the Government’s commitment to remedy the Basseterre High School issue and the decision to end the shift system by building the temporary facility at Taylor’s. He further revealed that a brand new school will be constructed shortly.

Minister Richards eloquently highlighted the plans his Ministry and the Government currently have for the hundreds of students, teachers and administrators who rely on the wisdom of the Government for its people. Mr. Richards made a special appeal to the people living in the Diaspora. He encouraged them to become investors in their homeland and assured them that there are many opportunities for them to return home to establish businesses.

The Federation’s Prime Minister Dr. The Honourable Timothy Harris took to the floor to loud applause from the energetic crowd and clearly impressed upon the gathering the successes of the Government and the Federation as a whole. Prime Minister Harris assured nationals that the Federation is steadily progressing. Evidence abounds in the fact that St. Kitts and Nevis is among the top three (3) countries in Latin American and the Caribbean projected to realize an impressive 5% growth in the economy for 2016.

The Church hall erupted with applause when the very animated Prime Minister expressed confidence in the fact that the Unity Government is in “full control of the country” and that the Government is mindful of what it is doing. Prime Minister Harris emphasized that, “There is no need to rush things in the country. Running the affairs of a country is not a sprint, he said. “It is a marathon!”

Dr. Harris reiterated some of the salient points highlighted in Deputy Prime Minister Richards’ presentation and further assured citizens residing in New York that positive things are indeed happening in the Federation. In fact, he lauded the fact that over fifty (50) promises highlighted in the Team Unity’s manifesto have already been implemented in quick time and that many more promises will be fulfilled later on this year.

Dr. Harris stressed on many aspects of the Federation’s development including the economy, security, poverty alleviation, job creation and education, all with a view to highlight the successes and challenges the Government faces. Prime Minister Harris also impressed upon the attentive audience his government’s pay-per-performance initiative, which is currently being formulated with a view to bring about more efficiency, responsibility and effectiveness within the public sector.

The lively and engaging question and answer segment allowed nationals to engage Government officials on the various topics discussed and many important questions were and comments from the floor were fielded by the officials. The Prime Minister and his Deputy did an excellent job in answering and clarifying many issues that were of concern for the attendees.

Many nationals expressed their delight in hearing from both the Prime Minister and the Deputy Prime Minister, along with the Director of People’s Empowerment in one forum: an initiative nationals hope they can see again. The Government and the Department of Peoples Empowerment with responsibility for citizens living in the Diaspora promised to visit other Diaspora communities as well.

Saturday’s meeting was chaired by Charge` D’Affaires at the Permanent Mission of St. Kitts and Nevis to the United Nations, Mrs. Ghislaine Williams-Clarke while closing remarks were delivered by Advisor for Diaspora Affairs Mrs. 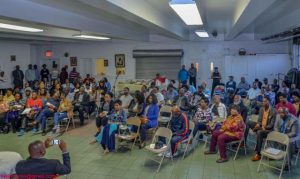 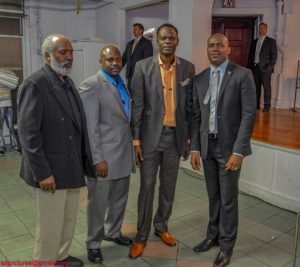 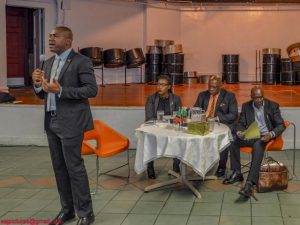 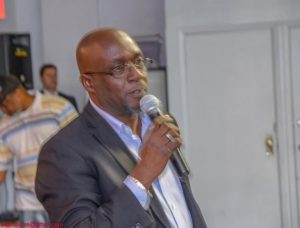 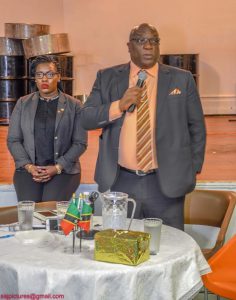