(CHARLESTOWN, NEVIS)- Nevis’ marine life is a large part of our natural beauty which attracts many tourists to visit our island. With its exotic species such as the turtles, the water that surrounds Nevis offers a lot for tourist to explore and see. 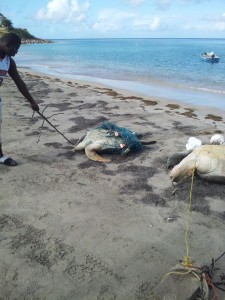 Interestingly, many tourists travel thousands of miles to the Caribbean to see the six of the seven species of sea turtles that calls the Caribbean their home. Unfortunately, turtles are frequently hunted for their shells and meat which is a lucrative catch for local fishermen. Even though it is not illegal to hunt for turtles here in Nevis during the turtle season one has to take into consideration that Nevis is a tourist based destination.

Richard Pievitt, a native from England and a first time visitor to Nevis had an unwelcomed visit on his first day while at the Oualie Beach Resort on Wednesday, January 22, 2014. Pievitt witnessed a fisherman bringing ashore six (6) turtles covered with nets and ropes that he caught and were about to be butchered. In an interview with Nevispages, he said coming to a place like this and seeing turtles are one of the greatest attractions. Pievitt describes what he saw as ‘sad’ and, he is hoping that the hunting of the turtles would discontinue.

A local businessman who was also present at the time when the turtles were brought ashore indicated that there is a period during the year when fishermen are allowed to catch as many turtles as they so desire. He indicated that the law gives them that opportunity, but being a tourist based destination and allowing the capturing of turtles during the heart of the tourism season makes Nevis appears more like a savage rather than a tourist based destination. He said six (6) turtles were brought ashore alive in the presence of a few tourists and some of the comments that were made gives Nevis a bad name. He further indicated that turtles are endangered species which tourists love and adore as much as the whales and dolphins and they should not be killed.

Owner of the Oualie Beach Resort, Mr. John Yearwood was also woeful about the number of turtles that were captured and brought ashore in the presence of his guests. Yearwood stated that people come thousands of miles to see a live Hawksbill turtle.

Yearwood indicated that for economic and emotional purposes the government should banned turtle hunting. According to him, “when tourists visit our wonderful and eco-friendly destination where we respect nature and they walked across this lovely beach and come across a turtle about to be butchered it doesn’t give Nevis a good impression”.

He further stated that what was so dreadful is that one of the turtles was tagged with a tag from Florida and he was told that the fishermen quickly removed the tag and disposed of it.

Yearwood highlighted that if we want to take tourism serious, we need to catch up with the rest of the world and banned turtle hunting and not just for a part of the year but for the entire year.

Criminal Investigation Department to Benefit from Donation of Laptops from Social…