THE UK Government is rebuffing attempts by several Caribbean countries to force it to pay reparations for slavery.

The Foreign & Commonwealth Office told The Voice that money was not the solution to righting the sins of the past.
A spokesperson said: “We do not see reparations as the answer. Instead, we should concentrate on identifying ways forward with a focus on the shared global challenges that face our countries in the 21st century.

“Slavery was and is abhorrent. It is a sad fact that, although slavery is outlawed internationally, millions of people are still living in conditions of slavery worldwide. The UK unreservedly condemns slavery and is committed to eliminating it.”

When slavery was abolished in Britain in 1834, £20 million of taxpayers’ money was paid to slave owners as compensation for loss of ‘property’.

The sum represented 40 per cent of the Government’s annual spend at the time and would be worth approximately £16bn by today’s standards.

The Caribbean Community (CARICOM) – an economic group of 15 Caribbean countries – used the platform of the UN General Assembly last week to advance their lobby for reparations on the basis that the legacy of slavery and colonialism caused irreversible damage to the socio-economic growth of the region.

The group of tiny Caribbean islands, the majority of which were former colonies of Britain, has since filed a lawsuit against Britain for its role in slavery in the English-speaking Caribbean nations, France for its role in Haiti, and the Netherlands for Suriname, which is located in South America.

Speaking at the United Nations General Assembly on September 27, Prime Minister of St Vincent and the Grenadines Ralph Gonsalves argued that European nations must pay for their deeds.

“The awful legacy of these crimes against humanity – a legacy which exists today in our Caribbean – ought to be repaired for the developmental benefit of our Caribbean societies and all our peoples,” he said. 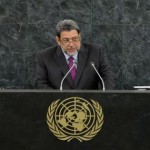 Prepared for a long and complex battle, CARICOM has hired London-based law firm Leigh Day, which earlier this year won £19.9m in compensation for Kenyans tortured by the British during the Mau Mau rebellion of the 1950s and 60s.
Lawyer Martyn Day said: “It is clear the heads of CARICOM mean business when it comes to gaining reparations for the impact of the slave trade on the Caribbean nations today.

“We have been brought in to advise them on the best route to bringing a legal claim if they are unable to reach agreement with the British, French and Dutch Governments. Our work is still in the early stages but there is a clear desire for a speedy resolution.”

The legal case will be brought to the UN’s International Court of Justice, based in The Hague in the Netherlands.

A date for the court proceedings is yet to be confirmed.