United Kingdom: Stronger and Safer Together

Foreign Secretary: We can act as a powerful force for good in the world, but our strength lies in our unity. We are stronger and safer together.
The Rt Hon William Hague MP

In March last year, I visited a refugee camp in the Democratic Republic of Congo to meet some of the 200,000 women and children who are victims of warzone rape in that country.

Since then, and after a sustained diplomatic effort, 70% of the member states of the United Nations have endorsed a declaration to end these abhorrent crimes. And in June, the United Kingdom will host a global summit as the next step forward.

This campaign to protect the vulnerable, tackle impunity and foster long-term peace is one that I have given my whole-hearted support. I’m pleased that we have come so far in such a short time. As Nelson Mandela said: “It always seems impossible until it is done.” What we have achieved, working with partners, is to break the silence on a taboo subject that has ruined many lives.

But we could only do so because we had the full weight of the United Kingdom, its alliances and its first-class diplomatic network behind us. As ever, it’s not enough to have the ambition, you need to have the clout.

The United Kingdom is one of the most successful political and economic unions there has ever been. We can act as a powerful force for good in the world, but our strength lies in our unity. We are stronger and safer together.

That’s why, on 18 September this year, I sincerely hope and trust that the people of Scotland will vote to remain part of the United Kingdom.

There are those who say that Scottish values are different from British values, and cite this as a reason to end our historic union. I strongly disagree.

Is it really credible to suggest that compassion stops dead at Gretna Green or that any of us has a monopoly on respect for human rights and the rule of law? These values have developed over centuries of shared history on these rain-swept isles.

Seen from overseas, not just Scotland, but all of the UK is a haven for human rights, free trade and fair play; we are known for helping others and being actively engaged with the wider world.

But we don’t just share these values. By acting together, we have the power to put them into practice.

Together, as the world’s sixth largest economy, we have a voice that is heard in every major international forum – from the UN Security Council to the G20 to the European Union.

Together, we are the world’s number one soft power, with the British Council in 110 countries promoting universities such as St Andrews and Edinburgh that rank among the world’s finest, and helping to bring 40,000 students a year to Scotland; with creative industries that have generated unforgettable characters such as Harry Potter, Sherlock Holmes, Dr Who and James Bond; while for tourists, we offer events like the Edinburgh Fringe and Notting Hill Carnival, world-class museums and landscapes as beautiful as the Yorkshire Dales and the Highlands.

Together, we are the world’s second largest aid donor, giving more than any other country in the world other than the United States and helping millions of people to lift themselves out of poverty. A clear example of our combined impact is the joint response to Typhoon Haiyan, the strongest storm ever to make landfall, which tore across impoverished, low-lying areas of the Philippines in November.
Infographic: The world’s top ten aid donors. 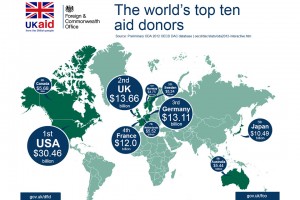 Within days, an appeal to the public had been launched in Glasgow City Chambers. The people of Scotland responded magnificently, giving almost £5m. The Scottish Government gave a further £600,000. But our help did not stop here.

Around the United Kingdom, a further £80m was raised. The UK Government gave over £50m, and we were able to send HMS Daring, a Clyde-built destroyer, to give rapid and immediate assistance on the spot.

The extensive and resilient network that enables us to deliver quick and effective aid to those in need is the same network that Scottish and British people can rely on when they run into trouble overseas. This year will mark ten years since the Boxing Day tsunami. The stories from that traumatic time have surfaced in books and films, such as that of the desperate father portrayed by Ewan McGregor in the film ‘The Impossible’.

For every Scottish family, the reassurance offered by one of the world’s best consular services, operating through the FCO’s network of 267 offices in 154 countries and 12 territories, is not only a comfort, it can be a lifesaver.

This is a network that anyone from Scotland is entitled to turn to at any time, a network that answered about one million enquiries last year, and one that is three times the size of the network that the Scottish Government suggests an independent Scotland could offer.

The same network supports Scottish firms as they do business overseas, whether they are oil and gas firms from Aberdeen, or knitwear manufacturers from the Borders.

UK Trade & Investment, operating out of offices in London and Glasgow, covers 169 locations in over 100 countries. It links into markets that the Scottish Government has no plans to cover, but which might make all the difference between success or failure for an individual firm. UKTI also helped to land three-quarters of the investment projects that generated 13,500 jobs in Scotland last year.

Expanding trade with the world’s great and upcoming economies is something that I have put at the heart of our work overseas; a campaign to which we are devoting all of the UK’s considerable access and expertise.

And it took all of the UK’s diplomatic clout to win protection for whisky in China, so that what is sold as Scotch in Shanghai is genuinely ‘Made in Scotland’.

Adam Smith would be proud.

Not only we are stronger together, but we are also safer. The UK’s highly capable and professional armed forces and intelligence services are envied the world over. No one can predict exactly where tomorrow’s threats will come from, but knowing we have the infrastructure and qualified personnel in place to deal with these threats around the clock is something we can give thanks for every day. The experience they gained in keeping the 2012 Olympics safe will be invaluable this summer in protecting the Commonwealth Games.

Next week, I will travel to Geneva for the second round of Syrian peace negotiations; talks that the UK helped to make happen.

They are a stark reminder that many people don’t have what we often take for granted: security for our families, food on the table and a roof over our heads; the right to choose our leaders; and the ability to seek justice in the courts as recompense for wrong-doing.

Whether in Edinburgh or London, we know that we cannot turn our backs on what is happening in the wider world. These are Scottish values but British values too.

As the United Kingdom, we can be a powerful force for good. We are stronger and safer together, and together we are better able to make a difference in the world.