Charlestown,Nevis-Over 100 women from across the sub region, assembled at the conference room of the Mount Nevis Hotel, as they united in discussions that are aimed at bettering the condition of women in their respective territories and by extension, the world.

The forum which is the brain child of Junior Minister in the Ministry of Social Development, Hon. Hazel Brandy-Williams, commenced today Wednesday 22nd March and will climax on Thursday 23rd March.
It is being held under the theme: “I AM WOMAN.’ 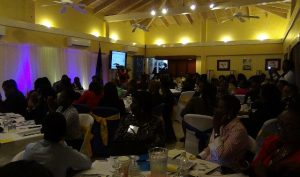 An impressive opening ceremony preluded the feature presentations for the morning.
The invocation was delivered by Mrs. Shennetter Maynard and Mr. Gavin Patterson belted out the national anthem of St.Kitts and Nevis, on steel pan.

The proceedings were ably chaired by Caricom Youth Ambassador, Miss Joy Napier who in her opening remarks, warmly welcomed all of the delegates to the forum and by extension, the island of Nevis.
She explained that the forum will focus mainly on the sustainable development goals or SDGS, with a sub theme: AGENDA 2030-PRIORITIZING INVESTMENT IN WOMEN AND GIRLS.
She pointed out that day one would focus on the sustainable development agenda and day two will focus on women in leadership and public life and more specifically in the political realm.
She indicated that St.Kitts and Nevis is committed to the realization of all seventeen SDG’S, hence the hosting of the regional conference.

Minister Brandy –Williams in her remarks, noted that across the world, women and girls are used, abused and misused.
‘Globally about 30% of women under the age of 15 are likely are estimated to suffer from physical or sexual violence.
In some countries women are still deemed not good enough, bright enough and strong enough to sit in the corridors of our parliaments and be the PRESENTER, as opposed to being the PRESENTEE or the PRESENTED.
Today we take a stand and say enough is enough…..,’ she stated.

Deputy Premier of Nevis and Foreign Affairs Minister in the federal cabinet, Hon. Mark Brantley, before declaring the conference officially opened, in his brief remarks, applauded Minister Brandy Williams and her team for coordinating the conference.
He welcome all to the QUEEN OF THE CARIBBEAN.
He noted that the common thread in the seventeen SDGS was the focus on women’s autonomy and gender equality and opined that an end must be put to all forms of discrimination and violence against women and provide equal opportunity for women in all spheres of life.
He broke the big news: ‘A woman in our midst will be the next chairperson of the Concerned Citizens Movement,’ he stated, to much applause.

Representatives from the various islands participating in the significant forum, then made brief ten minutes presentations on their progress with attaining the SDGS. Each country representative gave an update as to what is being done in their respective countries, in order to achieve the goals and the challenges that they are currently facing.
Interestingly, the representative from St. Vincent and the Grenadines, pointed out that in her country, a CHILD is defined under the Children act as anyone who is zero to 18 years of age, yet conversely the Marriage act states that 15 year old girls and 16 year old boys, can get married! Hence an urgent need to formalize the laws of the land.
Stellar presentations were then made by the two main facilitators:

Mr. Kenroy Roach a regional advisor for UNDP, Latin America and the Caribbean, spoke on the issue of ‘Making the SDGS work for women and girls: issues of priority on the path to 2030’ and Dr. Charmaine Crawford, the head of Gender and Development at the UWI Cave Hill campus, spoke on the topic: ‘Repositioning our education system to overcome gender serotypes and break down gender divide.’
The afternoon’s session, saw the women and a few men who were also present, placed into several groups, to discuss and present on some of the issues previously raised.
Immediately after the session, the women were scheduled to participate in a march/rally through the streets of Charlestown and climaxing at the Villa grounds with a grand showdown led by Queen of Soca: Destra.

Thursday’s session will be chaired by Solicitor Kurlyn Merchant and will feature presentations by Advisor in the OAS Asst. Secretary General, Mrs. Jacinth Henry-Martin on ‘The impact of women’s political leadership on democracy and the quality of governance.’
Dr. Tres-Ann Kremer-Political Advisor-Commonwealth Secretariat, on the topic: ‘Barriers confronting women in politics.’
Mr. Peter Wickham-Caribbean Pollster-‘Studying trends in women’s elections to parliament and factors which facilitated their success.’

Hon. Joann Massiah-member of parliament in Antigua/Barbuda-‘The impact of the media in influencing public attitudes towards women in politics and how female political aspirants can utilize the media to sell their message.’
The afternoon will climax with another group session, facilitated by Dr. Tres-Ann Kremer with expected recommendations to be tabled.
Hon. Hazel Brandy-Williams will then present certificates to the delegates.
The delegates will later that same evening, be part of an awards ceremony and cocktail reception.