Wednesday, May 2nd 2013 – Basseterre, St. Kitts:  The activities for the 2013 Digicel Kick Start Clinic in St. Kitts ended yesterday, Wednesday 1st May, 2013. If there was any doubt about the future for the sport of football in the Federation of St. Kitts & Nevis, thirty talented, young boys, who displayed their talent during the clinic, proved that great talent exists in our islands.  At the end of the clinic, with Chelsea FC Foundation coaches as witnesses, three boys were selected to attend the Digicel Kick Start Academy in Barbados later this year. 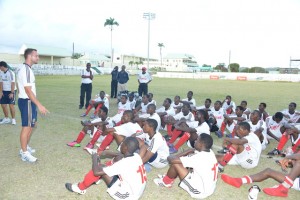 Yohannes Mitchum a talented mid-fielder, Devaughni Nisbett, the first goalkeeper to be selected since the hosting of clinics in St. Kitts and Geovannie Lake, striker, were selected at the end of the clinic on Tuesday 30th April. These three boys, along with the other footballers were coached and mentored by Chelsea FC Foundation Coaches – David Monk, Kane Cowburn & Andrew Ottley. Xavier Henry was the ‘wildcard’ selected player after gaining the nod from the coaches during the SAQ & Dribbling tests. All three coaches were impressed with the talent of the boys here in St. Kitts and spoke highly of them during the closing ceremony. Chelsea Football Club Senior International Development Officer, David Paul Monk, said that “the talent keeps getting better as we move across the countries.” He encouraged all the boys to “continue being involved in the sport of football, whether as an active player or a coach.” This year coaches from both St. Kitts & Nevis also benefited from the presence of the Chelsea FC Foundation coaches with a coaches workshop held the following day.

The boys along with the Chelsea FC Foundation coaches were guests on ZIZ TV’s Action Sports on Tuesday evening. All of the boys expressed that there were happy to be selected to attend the Digicel Kick Start Academy in Barbados in October. Devaughni Nisbett said that he was “feeling great about being selected and ready for the challenge later this year.” Local coach Ken Queeley thanked the visiting coaches and Digicel for providing both the boys and the coaches for the opportunity to train and gain invaluable knowledge during the clinic.

The Digicel & Chelsea FC partnership will also give everyone in St. Kitts and Nevis the chance to win an FREE trip for 2 to see the Chelsea FC play a game LIVE at Stamford Bridge in London. The prize package includes roundtrip St. Kitts to London, 5 night hotel stay, match tickets to a Chelsea home game & a stadium tour of Stamford Bridge. Runner-up prizes of Chelsea FC t-shirts are also available. Persons can visit  http://bit.ly/17DY8AI  to enter the competition.