The Church of God of Prophecy Fenton Hill hosted its annual two-day Basketball tournament on the weekend of Friday 22nd March and Saturday 23rd March at the Gingerland Hard Court. The tournament attracted a sizeable crowd on both nights and this involved not only church members of the competing churches but also members of the general public as well. 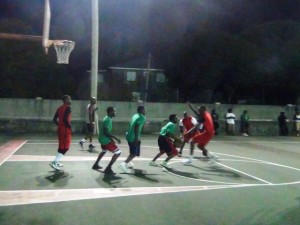 On Friday Night, the eliminations games were held. In game one, Ebenezer United came up against Gingerland Wesleyan Holiness. Ebenezer United scored 27pts and Gingerland Wesleyan Holiness scored 19pts. In game two, Crossroad Community Church played against Church of God of Prophecy. Scores in that game, Crossroads scored 30pts and COGOP scored 29pts. In game three, Zion Chapel blew away Calvary Baptist Church by scoring 40pts to 6pts respectively. Due to the fact that COGOP scored highest among the losing teams, that church advanced to the semi finals.

In Saturday night’s games, the first game was the continued and much anticipated great rivalry between the host team, Church of God of Prophecy and Zion Chapel Church in the first semi final match of the evening.. Scores in that game, COGOP scored 35pts and Zion Chapel scored 39pts. It was an exciting contest and a definite crowd pleaser.

In the Final match-up of the evening, it came down to the Reigning Champions Zion Chapel Church and Ebenezer United Church. Scores in the final game, Zion Chapel 35pts and Ebenezer 30pts. Zion Chapel therefore sizing championship honours and winning the tournament for the third consecutive year.
The Church of God of Prophecy would like to thank all the sponsors and well wishers who helped to make the tournament, the success that it was.