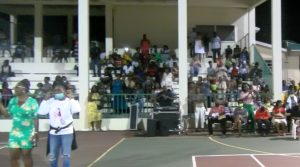 It was the second time that the famed singer was performing at the Brown Hill hard court and this time around, it was in celebration of Mothers.

Chief organizer and coordinator of the event, Dr. Patricia Bartlette, in delivering brief remarks, made it a point of duty to indicate that the concert was not about politics, but about praising God and celebrating mothers, who would have played significant roles in the lives of all present.

She also stressed that Mothers need help, as it still ‘takes a village to raise a child.’

Prior to the main act of the evening, there were renditions from the house band-The Restoration band; Devon Cornelius, Wrenford Dore and Venelle Powell, who included two brand new original songs in her delivery, specifically dedicated to her mother, but to mothers in general.

Then came the grand entrance of Evangelist Blucher and as they would say locally, ‘the place tun up!’

She sang a wide repertoire of Gospel songs including the popular ‘Can’t see dung’ and ‘Am still here.’

She concluded with several hits from her brand new album, which was officially launched in St. Kitts, the previous night.

The sizeable crowd warmed to her and were not shy to demonstrate their acts of praise and worship on the hardcourt.

The concert ended with the sale of her new CDS and special giveaways to quite a number of persons who were present.