Bougainvillea Clinic is pleased to announce that on Thursday, June 20, 2013 the BVI´s first ever prosthetic Penile Implant for severe erectile dysfunction was successfully performed by Dr. Dwayne Thwaites, American Board Certified Urologist, at our hospital. 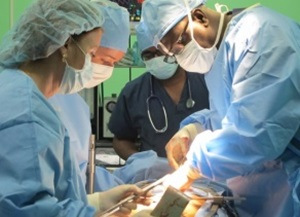 In fact, this operation was the second part of a double procedure on this patient, as Dr. Thwaites first implanted an artificial urethral sphincter to control urinary incontinence.

Both the erectile dysfunction and urinary incontinence developed as a complication of a radical Prostatectomy done elsewhere by another surgeon several years ago, to cure cancer of the prostate.

The operation was done under general anesthesia given by Consultant Anesthetist Dr. Craig Stoutt, MBBS, DM (Anesthesia).
These hydraulic prostheses are made by American Medical Systems, Inc (AMS). Mr. John Collaso Aviles, president of Urotech Inc, the Puerto Rican distributors of these products was on hand during the operation to ensure selection of the correct size of prostheses.

The operation went extremely smoothly. The patient was discharged home on the same day of the operation, after spending a few hours post-op in the recovery room of the hospital.

While our patient is not the first person living in the BVI to have had such an operation (done off island), this was the first time ever that either a penile prosthesis or a prosthetic urethral sphincter operation was performed right here in the BVI- at Bougainvillea Clinic.

Erectile dysfunction has many causes such as diabetes, increasing age, and radical prostatectomy or radiation therapy for prostate cancer.

Patients with ED which fails to respond to drugs such as Viagra and Cialis often resign themselves to a life of quiet desperation. Well, the good news is that they can now consider the option of having a hydraulic penile implant, which can give an erection whenever, where-ever and for as long as it is desired.
Satisfaction rates:
About 90%-95% of inflatable prosthesis implants produce erections suitable for intercourse.

Satisfaction rates with the prosthesis are very high, and typically 80%-90% of men and their wives are satisfied with the results and say they would choose the surgery again.

How is it done?

The inflatable penile prosthesis implanted by Dr. Thwaites today is often called the ‘Mercedes Benz’ of penile implants. It consisted of three parts, viz., two attached cylinders, a reservoir and a pump.

When the pump is squeezed saline from the reservoir inflates the tubes causing a solid erection until it is released by pressing on a deflation valve at the base of the pump to return the fluid to the reservoir, thus deflating the penis and returning it to the normal flaccid state.

By selecting the appropriate size of the implant a man could choose to have a thicker and slightly longer erect penis than he had before the onset of the ED.

A more “compact” 2- piece version of prosthesis (not supplied at BC), with an all-in-one reservoir and pump is available but because the reservoir is smaller the erect penis in this case is shorter and less robust as a trade-off for a shorter and simpler operation.

Don’t worry, the non-erect prosthesis will probably not be noticeable!

After implantation of the prosthesis a small surgical scar where the bottom of the penis meets the scrotal sac can be seen by the man but other people probably will be unable to tell that a man has an inflatable penile prosthesis. For example, most men would not be embarrassed in a locker room or public restroom.

When the penis is inflated, the prosthesis makes the penis stiff and thick, similar to a natural erection. Most men rate the erection as shorter than their normal erection but with the ‘Mercedes Benz’ 3-piece implant, a little extra length can be added; these newer models having cylinders that may increase the length, thickness, and stiffness of the penis.

A penile prosthesis does not change sensation on the skin of the penis or a man’s ability to reach orgasm (the nerves that cause erection are quite separate from the nerves that sense pleasure).

Ejaculation is likewise not affected (except for men that have had a radical prostatectomy- in which the prostate and seminal vesicles with the ejaculatory ducts are removed). Eroticism and the erectile function are separate functions.

Other Urologic Surgery at Bougainvillea Clinic

At Bougainvillea Clinic Dr. Thwaites now also does Green Light Laser Prostatectomy when medical therapy has failed to relieve symptoms of obstruction due to BPH and can treat kidney and bladder stones by Lithotripsy to breakup/pulverize the stones.

Thanks to Dr. Dwayne Thwaites and a now well-equipped Bougainvillea Clinic patients in the BVI now have access to a wide range of procedures for prostate, bladder and kidney conditions, which before could only be done off-island.

With these services in urologic surgery as well as in orthopedic and spinal surgery, plastic and reconstructive surgery, gynecology and general surgery, Bougainvillea Clinic is now seeing an increase in medical tourism with patients coming not only from other Caribbean islands, but also from as far afield as the USA and occasionally from Europe to have surgical procedures done here in the BVI.
.