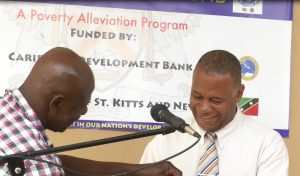 The building was officially opened in an impressive ceremony at the school, held on Friday 25th January.

The ceremony was ably chaired by Delroy RAS IROY Pinney, who established the protocols for the day and warmly welcomed all present.

The invocation was delivered by Pastor Joseph Morton and the national anthem was rendered by some of the students at the school.

He indicated that the project was approved in July 2016 and the invitation for bids, was sent out in October of that same year. 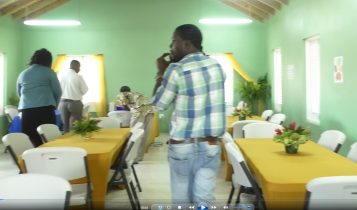 The completed building will not only be used for its original intention of a lunch room, but also provides the capacity as a meeting and training room.

He pointed out that the children previously ate their lunches on the corridors of the school, which was neither convenient nor comfortable.

Permanent Secretary in the Ministry of Education, Mr. Kevin Barrett, added his voice to the proceedings and lauded Headmistress Violet Clarke for her vision and drive, in ensuring that the cafeteria became a reality for the school.

He noted that it was collaborative effort and thanked all of the individuals and entities that assisted in completing the structure.

An elated Minister of Community Development, Hon. Eric Evelyn, was quick to point out that the acquisition of the cafeteria for the school, fitted in nicely with the United Nations’ established sustainable development goals and stated that goals 3 and 4 spoke to good health and wellbeing and quality education.

He stated: ‘People cannot learn properly if they are not properly fed. As an administration, we are integrating in all we do –this school is not left behind. You are just as important to the development of Nevis.’

The students at the school then thrilled the sizeable audience with a dance; a skit and the well-known chorus ‘Thanks.’

The building was then officially blessed by Pastor Joseph Morton and the ribbon was cut by Mrs. Clarke, ably assisted by Min. Evelyn.

The many persons present, then had an opportunity to tour the impressive building and later enjoyed snacks, utilizing the new furniture