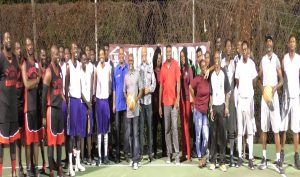 The Nevis Amateur Basketball Association (NABA) league commenced on the evening of Saturday 7th April at the Church Ground hard court. The main sponsor of the tournament is SL Horsfords and company LTD.

Despite a slight controversy for starters when two youthful teams were refused entry into the tournament because of the fact that they had not met the registration deadline the evening went well and provided much entertainment for the sizeable crowd on hand.

A brief opening ceremony was held, prior to the action on the court and featured a few addresses after prayer and the national anthem on pan by the Burke sisters’ twins.

The proceedings were ably chaired by Secretary of the association Miss Shoya Lawrence who noted that the theme for the tournament is : ‘Through Basketball, we prevent crime.’

President of the Association Miss Wanda Parry lauded the sponsorship efforts of SL Horsfords and noted that the aim of her Association, is still to make Basketball the top sport on the island.

Sponsor’s rep, Mr. Carlisle BINGHI Pemberton who indicated that in his earlier years he too had played the game praised the continued efforts of Miss Parry and her Association for keeping the sport alive on the island and opined that maybe at the next Independence awards ceremony she should receive an award for her efforts.

He wished the teams well.

Minster of Sports the Hon. Eric Evelyn also lauded the efforts of Miss Parry and her team and noted that SL Horsfords has not only sponsored Basketball but other sporting activities such as Cricket and Football and indicated that they were indeed a good corporate citizen.

He admonished the Basketballers to play hard but to play fair; to respect the officials and each other and also indicated a liking for the theme under which the tournament was being played noting that once the players are actively involved in sports they would not have either the time or the energy to get involved in anti- social behaviour.

He then officially declared the tournament open. 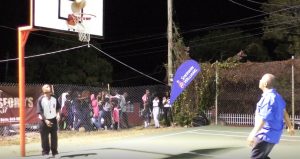 The vote of thanks was delivered by Vice president of the association, Miss Veronica Brandy.

Also present at the ceremony, were the Hon. Troy Liburd and the Hon. Spencer Brand.

One of the highlights of the evening, was a three point shootout contest between sponsor’s rep, Carlisle BINGHI Pemberton, Hon. Troy Liburd, Hon. Spencer Brand and Hon. Eric Evelyn.

Some of the shots passed as far as St. Kitts from Nevis from the hoop, but eventually Hon. Eric Evelyn sunk one in the sudden death shoot out, much to the delight of the spectators and to the amazement of his counterparts.

The four teams involved in the tournament then took to the court in a knockout competition of 10 minutes duration, with five minutes per quarter.

In game one, CG Massives defeated Dynasty Ballers 19 to 11; in game two, CG Rebels edged out Ole Skool 10 to 9.

By the way, that particular game, saw an interesting development, with long serving ace player for the CG Rebels, Jenerson France, suiting up for Ole Skool, versus his former team.