There was much excitement at the Gingerland Secondary School on Thursday 12th February as the school hosted its annual cross country runs.

The juniors ran during the morning session and the seniors took the spotlight during the afternoon.
For the junior girls, a determined Jeaneissa Caines outran the more favoured Schadone Liburd, on the back stretch leading to the school, to take gold and Zario Chumney ran away from the pack to take the junior boys event.

However, the main race of the day was the senior boys’ event.
Leroy Chapman received an early challenge but started to dominate as he climbed the hills into Rawlins and through the sixteen acres area.
By the time he was heading through Zetlands, there was no one close to him.
He stated after the event that he was more intent on winning the race but as he approached the Market Shop area, someone told him that he was on course for the record and he gave it his all.
It was an outstanding finish and he was cheered on every inch of the way to the finish line.
‘The final result is that he smashed a long standing record by another outstanding former athlete (now deceased), Thynel Martin. 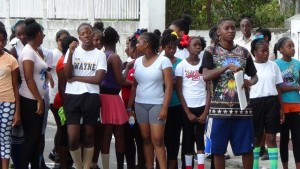 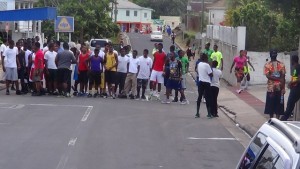 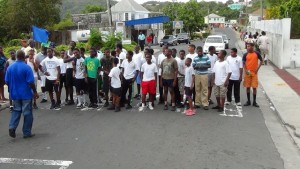