Constituency Boundaries Commission has been appointed since 2012

BASSETERRE, ST. KITTS, JULY 16TH 2013 (CUOPM) – St. Kitts and Nevis’ Prime Minister the Rt. Hon. Dr. Denzil L. Douglas says there is nothing secret about government’s intention to change the constituency boundaries as the Constituency Boundaries Commission has been appointed since 2012 and both the opposition and government have named their representatives. 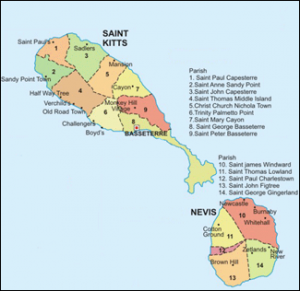 “We now have a situation in the Federation, where one constituency has some 6,000 inhabitants, while another has about 2,500. We had announced even before the last election (January 2010) that we would be changing the boundaries. Indeed we had tried to change them in 2009, but then, as now, the opposition dreaded and fought boundary changes. At any rate, knowing that our next election would take place in 2015, the Government and the Opposition began working together on the Boundaries Commission, since 2012 well in advance of the 2015 election,” said Dr. Douglas.

The two members who would be appointed by the Governor General on the advice of the Prime Minister for the Government side are the Honorable Dr. Earl Asim Martin and the Honorable Marcella Althea Liburd.

The Chairman who has been appointed to head this commission since last year is Mr. Peter Jenkins. He is appointed after the Governor General would have consulted with both the Prime Minister and the Leader of the Opposition.

“None of us could influence the Governor General; he would have appointed that Chairman in his own deliberate judgment after having consultations with both the Prime Minister and the Leader of the Opposition,” said the Prime Minister.

“Once these five persons have come together on the appointment of the Governor General to be the Commission, they then represent the Parliament and they represent the people of St. Kitts and Nevis. They are not necessarily to be there sitting as any members of Government or Opposition. Now they are a constitutional body called the Constituency Boundaries Commission, doing their work on behalf of the Government and the people of St. Kitts and Nevis and on behalf of the Parliament,” Prime Minister Douglas said.

He said work on the boundary changes began last year with the full involvement and cooperation of the opposition.

“That’s some three years before elections were due, but for some reason the opposition feeling that it cannot win the elections are trying to do all manner of things with regard to the boundary changes,” said the Prime Minister, describing the opposition’s attempts “to create some sense of drama and intrigue over the Government’s constitutional obligation to change constituency boundaries.”

“It is just a part of their ongoing confusion agenda in our country. Boundary changes are required, boundary changes will be made as a matter of constitutional responsibility, and there is nothing whatsoever that is secret about this,” said the Prime Minister.

Responding to statements by opposition parliamentarians that they will move to the Courts to prevent any change in the constituency boundaries, Prime Minister Douglas said:

“If they want to run to the court and try to stop it, that is their business, because I don’t need the boundaries to lead the Labour Party into victory. I have used the same boundaries on four different occasions and I have beaten the living daylight out of the Opposition. Four times we have done it; the boundaries are ours; we love them as they are but we have a constitutional obligation to do what we have to do. So they are running around like headless chickens just as the last time running to the courts the entire time saying ‘we gun stop him, we gun stop d boundaries,’ they don’t understand that the elections were already won.”

49.- (1) There shall be for Saint Christopher and Nevis a Constituency Boundaries Commission (hereinafter in this section referred to as the Commission) which shall consist of –

b) two members of the National Assembly appointed by the Governor-General, acting in accordance with the advice of the Prime Minister; and

c) two members of the Assembly appointed by the Governor-General, acting in accordance with the advice of the Leader of the Opposition:

provided that the chairman shall not be a member of the Assembly or of the Nevis Island Assembly.

(2) A member of the Commission shall vacate his office-

a) at the next dissolution of Parliament after his appointment,

b) in the case of the chairman, if any circumstances arise that, if he were not a member of the Commission, would cause him to be disqualified for appointment as such;

c) in the case of a member other than the chairman, if he cease to be a member of the National Assembly otherwise than by reason of the dissolution of Parliament; or

(3) The Commission may regulate its own procedure and, with the consent of the Prime Minister, may confer powers and impose duties on any public officer or on any authority of the Government for the purpose of the discharge of its functions.

(4) The Commission may, subject to its rules of procedure, act notwithstanding any vacancy in its membership and its proceedings shall not be invalidated by the presence or participation of any person not entitled to be present at or to participate in those proceedings:

Provided that any decision of the Commission shall require the concurrence of a majority of all its members.

50.- (1) The Constituency Boundaries Commission (hereinafter in this section referred to as the Commission) shall, in accordance with the provisions of this section, review the number and boundaries of the constituencies into which Saint Christopher and Nevis is divided and submit to the Governor-General reports either-

a) showing the constituencies into which it recommends that Saint Christopher and Nevis should be divided in order to give effect to the rules set out in schedule 2; or

b) stating that, in its opinion, no alteration is required to the existing number or boundaries of constituencies in order to give effect to those rules.

(2) Reports under subsection (1) shall be submitted by the Commission at intervals of not less than two nor more than five years.

(3) As soon as may be after the Commission has submitted a report under subsection (1) (a), the Prime Minister shall lay before the National Assembly for its approval the draft of a proclamation by the Governor-General for giving effect, whether with or without modifications, to the recommendations contained in the report, and that draft proclamation may make provisions for any matters that appear to the Prime Minister to be incidental to or consequential upon the other provisions of the draft.

(4) Where any draft proclamation laid before the National Assembly gives effect to any recommendations of the Commission with modifications, the Prime Minister shall lay before the Assembly together with the draft a statement of the reason for the modifications.

(5) If the motion for the approval of any draft proclamation laid before the National Assembly under subsection (3) is rejected by the Assembly, or is withdrawn by leave of the Assembly, the Prime Minister shall amend the draft and lay the amended draft before the Assembly.

(6) If any draft proclamation laid before the National Assembly under subsection (3) or (5) is approved by a resolution of the Assembly, the Prime Minister shall submit it to the Governor-General who shall make a proclamation in terms of the draft; and that proclamation shall come into force upon the next dissolution of Parliament after it is made.

(7) The question of the validity of any proclamation by the Governor-General purporting to be made under subsection (6) and reciting that a draft thereof has been approved by resolution of the National Assembly shall not be enquired into in any court of law except upon the ground that the proclamation does not give effect to rule 1 in schedule 2.