Facilitator at Stone Deals gives back to PEP

Basseterre, St. Kitts (November 18, 2013) — The successful festival organised and held by the People’s Employment Programme (PEP) at the Independence Square Basseterre on Friday November 8 meant a lot of things to the different people who took time to visit the diverse booths where the PEP participants showcased their various talents. 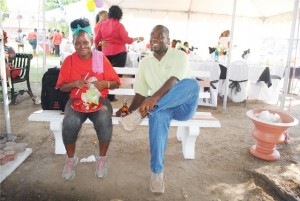 Mr Geoffrey Hanley, PEP’s Project Manager, who would have known the layout of the booths long even before the festival took part, still visited all the booths, some of them more than once depending on what was taking place or the guest he was showing around.

One of the booths he visited was that of Stone Deals, a company operating out of Bourryeau that has nine People’s Employment Programme trainees, among them three women who are under the Women in Construction Trades (WICT) component of PEP. The nine are training under Mr Heston Hamm, the facilitator, who is also the CEO of the company.

Their booth depicted outdoor living, where they laid out concrete tables, stools and benches and other concrete products which were made by the PEP trainees. To make it complete, they even had a coal grill where they barbecued juicy chicken legs. They made hotdogs and had even corn on the cob, and had a range of drinks, for offer to the visitors to the booth.

The PEP Project Manager would have visited the booth more than once and was happy by the work he saw that had been done by PEP trainees and also the food they offered. It was the real Kittitian outdoor living. Much later in the afternoon, one of the WICT trainees, Ms Deborah Hanley, went looking for Mr Geoffrey Hanley with a message that left him teary.

“It was quite heart warming and emotional at the same time when I was asked by one of the PEP participants in the Women in Construction Trades specifically assigned to the Stone Deals, those who are working on the stones designs, that she needed to make a presentation to me,” recalls Mr Hanley.

“On arrival to the site I then discovered that the outdoor backyard patio table and stools that were made from cement painted beautifully were handed over to me showing their appreciation for the hard work that I have been doing with the People’s Employment Programme.” 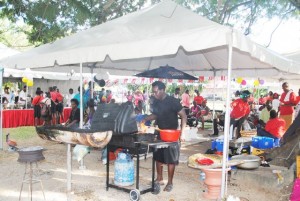 Mr Hanley noted that the action brought a sense of pride and humility to him knowing that some persons out there were really appreciating the work and the energy and the effort that is being put into the entire People’s Employment Programme by the entire staff.

“Today basically it was outdoor living having a holiday in your own backyard and so we had that setting,” said Mr Heston Hamm of his company’s participation at the PEP Festival. “We had a really good time in terms of all of the trainees participated greatly and so we really had like a backyard setting. They had a holiday in their own backyard.”

According to Mr Hamm they decided to turn over all of the concrete products that were on display at the booth, worth thousands of dollars, to the head of the People’s Employment Programme Mr Geoffrey Hanley as an appreciation for what his office and staff have done not only to the nine PEP trainees that are working under him, but to the country as a whole.

“The trainees that we have today those are the one who did everything that you have seen here,” said Mr Hamm. “What you are seeing today is really a manifestation of what they have always been talking about getting young people to get involved in great and creative stuff and so this is what happened.

“It is a lot of creativity you have been seeing in our backyard. We have pelicans and leaves all made of concrete, we had a number of stuff, most of all we had the table set, and we have paving stones, something that creates a nice setting in your backyard and we feel positive and I personally feel proud of what happened here today, it is really a good idea.”