Gingerland, Nevis – It was a service fit for a King and Queen and indeed both the featured individuals on the day, were regally attired. 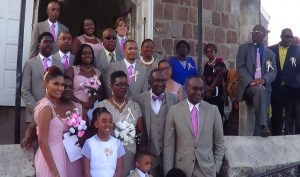 It was Saturday 24th June and the occasion was the celebration of 50 years of marital bliss between Frederick Morton Sr and his beloved wife, Delores. The venue was the St. George’s Anglican Church and unlike fifty years prior, when the officiating Minister was Canon Edgar Blant, this time around, it was the venerable Dr. Alson BH Percival.

A huge number of family members and friends were on hand for the occasion, similar to what occurred fifty years ago, according to the resplendent bride. Frederick Sr was in his element as he teasingly flirted with his wife and encouraged her to get close, as they approached the altar.

The processional was unique and intriguing. It all started with the beautifully blended voices of Gharlic and Arita, and with the bridesmaids and the grooms’ men making their grand entrance in coordinated fashion. It was something to marvel at.

A brief candle lighting ceremony was conducted by Terrence Simmonds and this was followed by the singing of the hymn, ‘Oh perfect love.’ Scripture readings were done by Junsiha Tyrell and Britany Harper. This was followed by remarks by Pastor Davidson Morton.

Dr. Alson Percival delivered the sermon of the day and this was followed by the renewal of vows and the blessing of the couple. Some general announcements were made by son of the happy couple, Mr. Frederick Morton Jr.

After the recessional, the action moved to the Anglican Church hall, nearby, where the reception, which was ably chaired by Eric Evelyn, was held. One of the features at the reception, was the viewing of a video, which told in a nutshell, the love story of the couple, via photos and interviews.

During the video presentation, it was expressed that despite their love for each other, they did have some rough times in their marriage, but God had brought them safely through, to see fifty years. Later that same evening, an after party was held at Reviere House as the celebrations went on until way into the night.