Basseterre, St. Kitts, July 26, 2013 (SKNIS): The Government of St. Kitts and Nevis is taking a closer look at management practices of sporting programmes and facilities, after reviewing current models and exchanging best practices with sister agencies in the OECS and Australia. 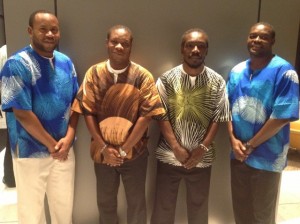 Acting Director of Sports Jeffrey Hazel and Senior Sports Officer Vernon Springer were among representatives from the OECS, who participated in the recently held 21 day Caribbean Sports Leaders Tour of Australia 2013.

“We participated in various sessions such as policy development, strategic planning, [as well as] identifying sport and government priorities,” Mr. Springer stated. He added that the areas of budget management, boosting volunteerism and managing the sporting infrastructure were eye openers.

“We’re in [discussions] with them to establish a Memorandum of Understanding for the New South Wales Cricket Club to come to St. Kitts and Nevis in 2014 for training,” said Springer, noting that the recently announced upgrades to the Warner Park Cricket Stadium – which includes a full lighting project – were welcomed by the club administrators.

“We’re also talking to the Queensland Institute of Sport,” he added. “Through that programme we’re looking to identify one or two young cricketers from St. Kitts and Nevis to go there for a two-year period.”

Additionally, the OECS representatives explored the possibility of Australia providing a netball coach to travel to various member territories to improve coaching techniques and players’ skill.

Overall, the senior sports officer described the tour as “great” and indicated that the new sport initiatives will promote aspects of the OECS Economic Union that allow for the free movement of people and closer collaboration and coordination among member territories.