BASSETERRE, ST. KITTS, MAY 13TH 2013 (CUOPM) – Grade Two students of the Lyn Jeffers School in Nevis that with hard work, dedication, discipline, compassion and understanding there is nothing in this world that they cannot achieve. 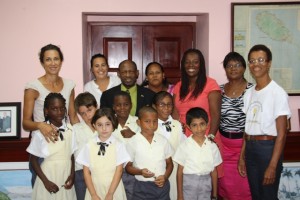 This was the message to the students from St. Kitts and Nevis’ Prime Minister when they, accompanied by class teacher Samantha Forde and some parents, visited him last Friday at his office at Government Headquarters on Church Street in Basseterre.

Dr. Douglas greeted the greeted the parents, students and teacher and thanked them for giving him the humble opportunity to meet the future leaders of the twin-island federation.

Following an introduction, the St. Kitts and Nevis leader challenged the students in a lively question and answer period.

Junique Eddy of CUOPM reports: “His first question was to name the first Prime Minister of St. Kitts and Nevis of which the 2nd Graders even though they were thoroughly studying it in recent times could not bring it to their memories and then PM Douglas then challenged them to get the answer for their homework. 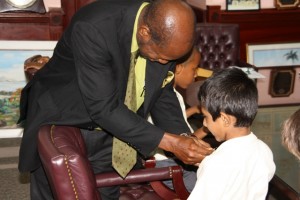 The next question that was asked by PM Douglas was to name the first President of the United States of America, which generated some very interesting answers. After a few attempts young Amadi Byron hit the nail on the head by answering correctly.

The third question was for them to give the reason why their school was named the Lyn Jeffers Primary School and to no surprise all the students happily raised their hands as this was seen as the easiest question thus far.

The PM then said that after having the humble opportunity to question the 2nd Graders it was only fair for them to have a chance to ask the Prime Minister any question that they would like.

The first question was asked by young Amadi Byron who asked Dr. Douglas how it felt when he was first elected into office.

The next question by Jonathon Essien was how it felt to be in government for 18 years.

After a series of serious questions by other students, a bit of humour came from Jonathon Essien who asked PM Douglas about his favourite games as a child to which the PM replied table tennis and track field claiming that he was a very fast runner in his time.

Class teacher Mrs Samantha Forde thanked the Prime Minister for the “extraordinary opportunity” for the students not only meet him but to be in his office and being treated like royalty and that he had found the time to meet with the students and parents.

She explained that the children have been studying him heavily for approximately 2 weeks prior to their special visit.

The vote of thanks on behalf of the students was given by the young Mr Amadi Byron who was the most active all day answering questions left, right and center.

On behalf of the students of Grade2 of the Lyn Jeffers Primary School he thanked Dr. Douglas for being a good Prime Minister for giving them the great pleasure to come see him and to have a face to face interaction with them.

PM Douglas then gave each student, parent and teacher, a St. Kitts and Nevis flag pin and called for the pin to be worn with pride and dignity.

The students started their tour of St. Kitts by way of the St. Kitts-Nevis Scenic Railway and also visited Bloody Point. Stops were also made at the museum, the Berkeley Memorial at the Circus, Independence Square and Port Zante before returning to the ferry terminal for the trip back home.

US $50,000 Grant Available to Establish or Expand Beekeeping in St. Kitts And Nevis