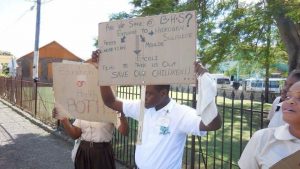 That biblical verse refers to karma in the book of Galatians when it says, “Be not deceived; God is not mocked: for whatsoever a man soweth, that shall he also reap” meaning if you sow evil, you will reap evil in the form of suffering. And if you sow goodness, you will reap goodness.

WINNFM disclosed last Friday (April 6), that employees at the Department of Sport are once again being forced to vacate their workplace due to issues with mold.

“The staff is moving from the media centre on the northern end of the cricket stadium at Warner Park to the VIP boxes on the southern side,” the media house stated.

On Tuesday, April 10, the Ministry of Education announced that its administrative offices are being relocated to The Cable Building on Cayon Street, but no reason was given.

Mold has been plaguing the Team Unity Government, whose leader and candidates, promised that upon taking office, they will “immediately build a new Basseterre High School (BHS).”

After three long years no new BHS has been built…in fact construction has not even started on the Basseterre Water Table.

But truth be told, some of the major players in the plot which included sit-ins, demonstrations, sham meetings with parents and teachers, candle light vigils, press conferences and radio interviews – to win the February 16, 2015 General Election on the BHS issue, are not working on the BHS compound, but their new ministries have been dogged by “mold here…mold there …mold everywhere.”

The latest as pointed out by WINNFM is the Department of Sports, which falls under the Deputy Prime Minister Hon. Shawn Richards, a staunch supporter of the diabolical actions taken.

He too has had to deal with mold issues at the Clarence Fitzroy Bryant College (CFBC).

The Department of Health ordered the Administration Building at the main Burdon Campus of the CFBC closed for one month last August. It reopened and was again closed in November and remains closed Monday.

Mold was detected in the President’s office and administrative section. The office of the interim president has been relocated to a container in the yard of the main campus.

A section of CFBC’s Division of Technical Vocational Education and Management Studies located on Horsford’s Road was also deemed unfit for habitation by the Department of Health and closed in October of last year.

Areas affected are the offices of the Dean, the receptionist, the information technology manager, the webmaster and the guidance counsellor.

BHS Principal, Mrs. Carlene Henry-Morton, now Permanent Secretary in the Ministry of Tourism has had her share of mold at her new office in her new ministry after reniging on a promise ‘never to abandon my BHS students.’

Then there is the BHS Guidance Councillor, Ron Collins. He is now the Acting Permanent Secretary in the Ministry of Labour and Ecclesiastical Affairs.

His Department of Labour has had to evacuate three previous buildings. Why? Mold.

After several denials that the Department of Labour was contaminated, Collins and his Minister of Labour,  Hon. Vance Amory, bowed to public pressure from the  Labour Party caretaker for St. Christopher 8, Dr. Terrance Drew  and moved upstairs Athletes Foot on Victoria Road.

Employees who were tested were found to contain high levels of mold as high as 30 and 45 percent in their bodies.

Local, regional and international organisations have all said in official reports that nothing is wrong with the Basseterre High School.

Prime Minister Harris, Minister Richards and the Team Unity Cabinet have rejected reports from the local scientists, the Trinidad-based Caribbean Public Health Agency (CARPHA), the Caribbean Industrial Research Institute (CARIRI), also based in Trinidad and the Washington-based National Institute for Occupational Safety and Health (NIOSH) of the Centers for Disease Control and Prevention (CDC), which recommended that the buildings could be inhabited after remedial works are completed.

Although the reports were rejected the Harris PLP/CCM/PAM Government still removed three buildings from the original site and is using them as classrooms and to house the principal’s office at the temporary BHS at Taylors.

Desk, chairs, tables and air condition units were also removed and installed at the temporary BHS facility as well, as he Verchild’s High School and other schools.