The sad news circulated St.Kitts and Nevis on Monday that Netball icon, Cicely Grell-Hull had passed. She is credited as one of the persons who have made the game of Netball what it is on the island of Nevis and is one of the founding members of the Nevis Netball Association. 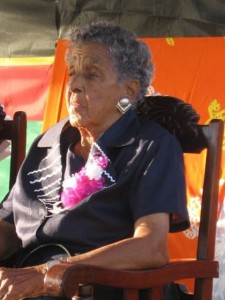 She was a long serving President of that august body and just four years ago, she received the signal honour along with another stalwart of the sport, Mrs. Dora Stevens, when the Nevis Island Administration named the netball complex in their honour. The netball Complex is now officially named ‘The Grell Hull-Stevens Netball Complex.

According to a release from the family, Ms Hull passed away on Sunday 2nd June at about 4.15 pm at her Harbour View home in St.Kitts, just days before her 94th birthday on Friday 7th June.

‘Mrs. Cicely Grell-Hull was born in Dominica on June 7th, 1919, the last of four (4) children to Gerald and Jane Grell. Due to her mother’s illness Cicely travelled with her to Nevis in 1933 to seek medical attention. At 14 years on her arrival in Nevis she was immediately registered in the Excelsior School where she completed her education. The Founder and Principal of the Excelsior School, Mrs. Helen Bridgewater M.B.E., was her aunt.

In 1942 Mrs. Grell-Hull joined the Civil Service and worked at the following government offices during her long career.

After her retirement from the public service Ms. Grell-Hull found work in the private sector with the late Mr. Spencer Byron, Mr. Eugene Walwyn and finally at the law chambers from Mr. Simeon Daniel where she served with distinction from 1978 to 1994.

In 1945, Cicely met and married Mr. Ashton Hull and from the union bore four (4) children:
• Jeanette Grell-Hull M.H presently residing in Nevis and who also became an outstanding netball player and Administrator
• Mr Anthony Hull residing in St. Kitts
• Lady Betty Hopkin residing in Grenada and
• Thomas ‘Bob’ Hull residing in St. Kitts.
Her husband worked as an Agricultural Officer which meant that the family had the opportunity to live on several government estates namely:
• Hamilton Estates – 1945 to 1952
• Cades Bay Estate – 1952 to 1953
• New River Estate – 1953 to 1959
• Hamilton Estate – 1959 to 1960

This experience exposed her to country living and helped her to develop an appreciation and love for crop and live stock farming and sugar production. When her husband died in 1960 Mrs. Grell-hull moved back to Charlestown and lived at Lynwood House where Daniel’s Business Complex is now located.

She was a great lover of sports and assisted many young cricketers financially in obtaining cricket gear. She played female cricket in Nevis in the 1960’s representing the female Civil Servants Team against the Business Cricket team on many occasions. She also played table tennis, lawn tennis, bridge and netball. Without doubt, her greatest contribution to Sports in Nevis was in the discipline of Netball.

She was a founding member of the Nevis Netball association serving several terms as President as well as in other capacities on the executive. She also worked closely with Mrs. Dora Stevens for many years to ensure that there was a constant flow of young netballers coming the Charlestown Secondary School to feed into the adult program of the Nevis Netball Association. She also worked assiduously to ensure that the sport of Netball was decentralized from Charlestown and spread into the various communities of Nevis. Her great love for the sport of Netball eventually rubbed off on her daughter Jeanette who became one of Nevis’ most celebrated Netball player and administrator.

When she was honoured by the Nevis island Administration, her response was:

“I am humbled too by this moment. You see, I never consciously worked to get into the limelight. Rather, any contribution that I might have made towards the development of the game of netball came as a result of my belief that we are all required to give unstinting service to our country.”

“I am pleased by this moment. I am pleased not only because my contribution to the sport is being recognized in this special way but also because I am in sufficiently good health to participate in this ceremony. My Presence is therefore testimony to the possible contribution of netball to longevity. I give God thanks and praise.”

“It is now well established that regular exercise and team sport are beneficial not only to one’s physical well being but their mental, social and spiritual well being as well. Let us remind ourselves that it is the youth of today who will ultimately take the leadership mantle as administrators of the sport in netball forward.”

President of the Nevis Netball Association, Ms Vera Herbert indicated on Monday that her Association is proud of the contributions made by Mrs. Hull and indicated that she has already extended condolences to the family on behalf of her Association.

The sporting fraternity and indeed the entire St.Kitts-Nevis community extend sincerest condolences to the family of this truly remarkable woman.