It was definitely a day of ‘fun can’t done.’
It was Monday 22nd April and the Fisher Folk of Newcastle hosted their first annual fun day at the VOJN Primary school’s grounds.
The fishermen from Newcastle competed in two main events versus the fisher folk from Indian Castle.
In event number one, the two competing sides engaged in a tug of war that certainly created much excitement. 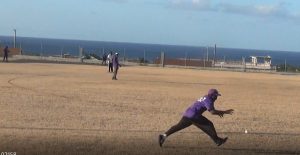 At one point, the Newcastle team was being pulled towards the center line and it looked all over for them but they suddenly regrouped and pulled the opposing team, tumbling over the line, to win the contest.
Minister of Agriculture, Hon. Alexis Jeffers, was part of the winning team.
The two teams then engaged in a 10 overs taped ball Cricket match.
The Newcastle team batted first and amassed 53 in their allotment of overs and reduced the Indian Castle team to 43 in response, to take bragging rights.
The crowd was well and truly entertained however.
What with a number of dropped catches; some fantastic fielding errors and some agricultural shots—well let’s say—fishermen shots.
Interspersed with the day’s activities was music by ‘Judgement sounds’; bouncing castle for the children and a sack race for them as well and much food and drink on sale.
A visiting contingent from the St. Kitts Fisheries Department, also teamed up with Conservationist, Janice Hodge, to ask questions pertaining to the protection of the ocean environment and the winners were awarded lovely prizes such as caps, bottles, pens; pencils, t-shirts etc.