At least 12 Caribbean countries are set to send their talented teens to compete in the 35th Edition of the Miss Haynes Smith Caribbean Talented Teen Pageant, which is scheduled for Tuesday December 30th at the National Carnival Village. 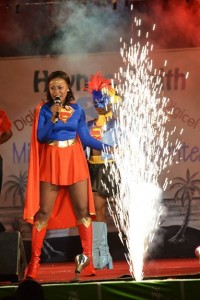 Antigua is expected to return and Guyana has confirmed their return to the pageant after a few years absence.

“This year there will be no Ambassadorial Appearance and the production number will open the pageant,” she said. “There will also be other changes that I will not reveal at this point, however, we will be as innovative and creative as we have always been,” she continued.

“As usual, we are going to have Caribbean celebrities apart of the show as it has been in the past. Our regional entertainers have made our show the most looked forward to and this year will be no different. We are currently in negoatiations with a number of regional performers .”

“Our committee is in full gear, and we’re ready to unfold an exciting package for all to see,” Mrs. Nisbett added.

This pageant is known around the Caribbean as “the” pageant which allows our younger most talented ladies to express themselves at a very high standard.

“Our emphasis is on talent and intelligence, they are the main focus of our show and as such carry the most points. We are very proud of the development of this pageant so far and we recognize that it is a major event throughout the entire Caribbean,” the newly appointed Chairperson said. “This pageant is a pageant which not only the people of St. Kitts and Nevis look forward to but also persons of other far reaching countries and we are very proud of how much it has grown.”

All-star band for this carnival

Adopted daughter of the soil launches EP in Canada