Basseterre, St. Kitts (October 30, 2015) — The man from Saddlers loved his job and worked for the sugar industry diligently until 1999, when his eyes started giving him problems. He was allowed time to recuperate but when he tried to return he was told there was nothing for him to do. When the industry closed in 2005 he was not paid anything.

“I did that job until 1999 and I take sick in my eyes,” recalled Mr Allan Rubaine Phipps. “I went back to the industry to work and they said there was nothing for me to do. But when the industry shut down in 2005, they did not pay me any money. Me I get no money at all, that is the reason why Prime Minister Harris started to talk about me.”

When the then flag-bearer for the opposition Team Unity, the Hon Dr Timothy Harris, went on the campaign trail and promised that he would remedy the ills meted out to the former sugar workers, Mr Allan Rubaine Phipps was among the many who believed him.

“I went to him during the campaign trail and talked to him,” said Mr Rubaine. “I talked to him and he said that I was going to get my money once he was in office. My name was out there, and yes I took him seriously because I knew he could deliver.

“Some people said he was just talking to get the votes, but I knew he was going to fulfil it. I talked to people and told them that he would do it. I felt good every time he called my name; me I had no problem with him talking about me.”

Now the Hon Dr Timothy Harris is Prime Minister of the Federation of St. Kitts and Nevis, and Mr Rubaine is praising him for having approached the friendly government of Venezuela which through its President His Excellency Nicolás Maduro made available a grant of EC$16 million to pay the aggrieved former sugar workers.

“It is good that the President of Venezuela came to give the cheques to the ex-sugar workers,” said Mr Rubaine. “I was there on Saturday (September 19) waiting to see him but he did not come because they say he took sick, but when he came on the Wednesday (September 23) they did not tell me, so I missed going to Basseterre to see him.”

Mr Allan Rubaine Phipps was born in 1944 in Saddlers Village. He attended school at Bethel and after he came out of primary school he joined small gangs in Belle Vue Estate as those were the only job opportunities available to them in those days. He used to cut cane, and recalled that they used to follow the senior cane cutters.

He became a tractor driver in 1967 hauling cane, and taking it to the Belle Vue siding of the railway line. He still has, as a memento that he proudly shows his visitors, a key for one of the Ford tractors he used to drive. He later was elevated to work as a bulldozer driver.

“I used to go up Tabernacle Main Road and when you go up and then we turn left and we go straight up Hope Mountain,” explained Mr Rubaine. “You get the cane and you come back the same road come back through Tabernacle and go straight down the road and catch the main road, and come to Belle Vue with them. Belle Vue railway siding was the point, by the church.”

Mr Rubaine said that he knew the Prime Minister’s parents who also used to work in the sugar industry. According to him, Mr Godfrey Nisbett who had come from Nevis used to drive a loader, while his mother Ms Margaret Harris used to spread trash.

“Me and his father were so; me and him get along so,” he said. “When I done work in the afternoon time I go straight into the field where he was driving the loader, and after he gone home he leave me, and I would then park up the loader in the estate yard. In the morning he gets up early, and he sees the loader and he goes again to work.”

His memory still serves him well. He knew Prime Minister Harris as a young boy who used to bring food to his father in the field, and when food would be brought to him, Mr Rubaine would take over the loader and help him drive it.

Mr Rubaine was present when the Prime Minister presided over the first pay-out for the former sugar workers on Friday September 18. Did other people have the faith in what Mr Rubaine told them? He said: “They ducked. I told them the money would be there but they felt this thing ain’t going to happen. I told them that I was feeling good that I get my money.

“A lot of the people did not think anything would happen, so they never turn up. A lot of people who worked in the industry ain’t turn up. It took a lot of people with their pants down. I called the PM and he said he was happy about us. I feel good about it.”

One of Mr Rubaine’s daughters, Ms Chantal Rawlins – a teacher, said that she used to help spread trash in the afternoons with her mother so as to earn extra cash. She however did not apply for the new pay-out because she was not on the payroll. She is happy that her parents have been paid something for the many years they worked in the sugar industry.

“That was a good venture,” said Ms Rawlins of the Prime Minister’s efforts to source the funds to pay the former sugar workers. “He campaigned on it so he had to have been looking for it. He got in February and by April we heard that the money was there, so I think he was looking before he got in. He was looking ahead on the future.” 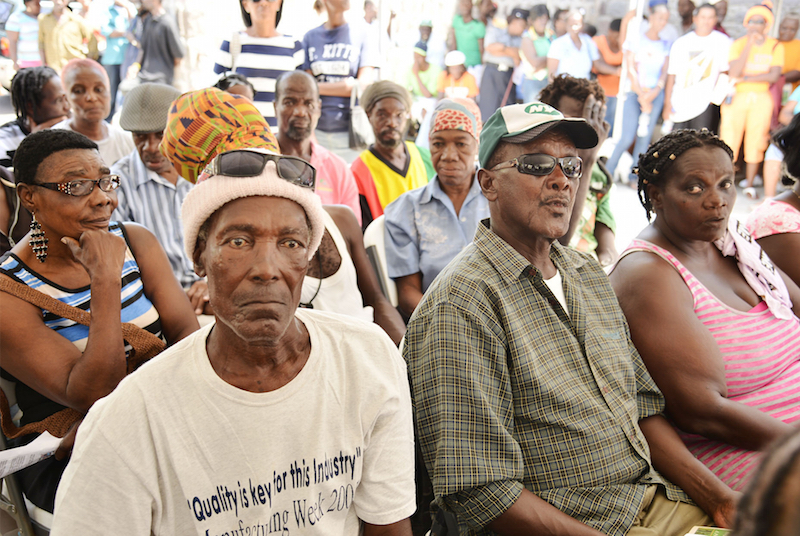