The evening after the historic signing of the SKNLP/NRP-inspired Contract for Progress in Basseterre, Prime Minister the Rt. Hon. Dr. Denzil Douglas came to Charlestown for the celebratory massive Rally and Concert, and surgically removed the Labour ‘bogey’. Announcing that it was the first time in his near 26-year history in elective politics and 20 years as Prime Minister that he was taking to the political stage on the sister island, the Prime Minister relished the occasion, and delivered what was easily the most impassioned and incisive political speech in the island’s history. Thousands of Nevisians, Kittitians and residents stood riveted chock-a-block on Main Street, and clogged all surrounding arteries to hear from the slate of SKNLP and NRP candidates for the February 16 poll, while the singer among them King Konris, belted out a spirited version of Unstoppable Force. And then it was Star Time!! 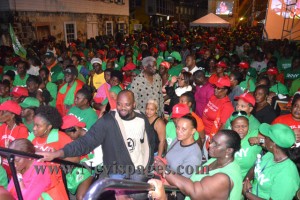 Cleared unfazed by the ruling of the London Privy Council earlier in the day which reinstated the injunction preventing the adoption of new and fairer electoral boundaries, the veteran leader told the thousands assembled: “The law lords of London do not elect governments, the people do. Gone are the colonial days when they chose government for us.” He said the next three days, Friday, Saturday and Sunday were crucial. “I want warriors around me,” the Prime Minister said, “warriors who will go into the highways and byways to finish the job.” He urged cowards to clear the way, as his forces moved to deliver an historic fifth term. He told Nevisians he wanted all 3 NRP candidates, Nisbett, Hector and Tyson as part of his Cabinet, as we forged a greater Oneness.

Earlier in the day, the Prime Minister and Nevis Reformation Party leader the Hon. Joseph Parry had inked the Contract for Progress first brought to the public at a massive BE AT ONE event held simultaneously at Pinney’s Beach (Nevis) and Port Zante (St. Kitts) on Thursday, Dec, 18, 2014. After a period of public consultation the document was finalized.

“Working for all Kittitian and Nevisian nationals, we the St. Kitts and Nevis Labour Party and the Nevis Reformation Party hereby agree to strengthen our relationship for the betterment of life and for progress in our Federation.” It pledged: We shall maintain the identity, purpose and mission of each political party while carrying both islands into a new era of collaboration. It said, “having built a relationship on communication, trust, and transparency we are determined to: protect and reinforce the rights of the citizens of St. Kitts and Nevis to decide on their own future; safeguard the achievement that have allowed our Federation to set an example for growth and prosperity in the Caribbean; and continue working for the benefit of all the citizens of our Federation based on the principles of mutual respect, equality, transparency, fairness, equality, freedom and justice.”

To pursue our mutually agreed goal, we intend to bring into force acts, constitutional amendments, regulations and policies that will ensure the realization of a raft of proposals.

“The set of proposals constitute our joint declaration of intent for the future of our federation. Remaining true to our roots and our focus on the prosperity of the people, we have now incorporated the demands of the people of St. Kitts and Nevis as put forward during our public consultation process,” the document reads.
“We are presenting this to you the people, and await the expression of your democratic will. We are one Nation under God, and we are your and the Lord’s humble servants.”
Thursday night, the Prime Minister said these proposals were incorporated into his Party’s Manifesto “St. Kitts and Nevis – to the next level” – launched earlier in the week.

He then masterly outlined how these proposals will impact the lives of Kittitians and Nevisians over the next five years.

In education: following on the four-year program of distribution of the one-to-one lap program to students of secondary schools, the program will be expanded to Grade Six students of primary schools nationwide.

In Agriculture: the Prime Minister envisaged model farms across the federation, providing nourishment for our people, cutting the import bill, and providing excess produce for export.

In turning the Federation green, extracting geothermal energy from the core of Nevisian earth to provide lower electricity rates, fuel the economy for manufacturing, and bringing in well-needed foreign exchange.

In health care, new hospitals for St. Kitts and for Nevis, and upgraded health care.

The crowd went wild, when the Prime Minister said he had envisioned a grand engineering scheme that would bridge the 2-mile physical divide between the two islands, where land would be reclaimed in the Narrows, providing real estate opportunities for hotels, marinas, and easier access to each island.
“This election is for you, your mother, your father, your aunt, your uncle, and more importantly your children,” the nation’s leader told the red and green-clad crowd in asking for the vote for the SKNLP and the NRP on election day.

Last night, beneath our feet, the generational shift was at work, the ghosts of Bradshaw were expelled, and with the command of a general, the Prime Minister announced that “the boss is here,” and told all and sundry “ I won’t leave Nevis out. I will never leave Nevis out.”

At the conclusion of his speech, the Hon. Joseph Parry, with whom he had forged this remarkable relationship that will forever change the history of St. Kitts and Nevis, moved forward to embrace the bold leadership.

They each held aloft a copy of the signed Contract for Progress.

Shirley Chisholm, American politician, educator, author and Congresswoman representing New York’s 12th Congressional District for seven terms from 1969 to 1983, and who in 1968 became the first African-American woman elected to Congress, and on June 25, 1972 became the first major party black candidate for president of the United States ( born to a Guyanese father and Barbadian mother) said: “You don’t make progress by standing on the sidelines, whimpering and complaining. You make programs by implementing the ideas.”

Last night showed that Douglas and Parry understands this.

This has been “Real Progress, Real Change.”

Agriculture Ministers in St. Kitts and in Nevis meet to discuss way forward for…