Charlestown –Nevis—Every year, the question has always been: Can the SHEKINAH Dance Theater put on another performance that could better the one of the previous year?

Every year, the response if virtually the same: Yes they can!
The outstanding dance group held its annual public presentations on Friday 3rd and Saturday 4th July at NEPAC.
To put it mildly, the Friday night presentation was done in front of a ‘sell out’ crowd.
The attendance at Saturday night’s performance was not the same, but the seats for the most part, were mostly filled, some with repeat attendees.

The program line up for the two nights followed the same format.
It all started with the national anthem by Keone Boddie and prayer by Elvira Hobson.

The scintillating performances were presented in two segments.
Segment one saw the following performances:
Winter can be lonely—intro prayer by the Shekinah dance theater
Winter white-Great are you Lord-featuring Diana Pemberton who is now based in St.Kitts but who leads out with that aspect of the dance group from there
Spring love-Love you forever—by MOON (a particular age group of the dance group)
Spring time-Lord I love you-by the SUN and JUNIORS
Song featuring guest artiste Lovelle Thomas
Spring is a time to renew-Overwhelmed—by Shekinah St.Kitts group
Motherless child—drumming solo by Binghi Parris
Summer blues-Bridge over troubled waters- performed by the tutors, which included chief coordinator of the event, Mrs. Tamecia Lestrade
Summer vacation-My God is good-oh-performed by the STARS
The God for all seasons-forever God—performed by the SUN and JUNIORS

There was a fifteen minutes intermission, during which time persons attending the event were able to purchase food and drink sold in the courtyard area.

Segment two of the show saw the following performances:
If you are out there—performed by guest artiste Dwane Hendrickson
Fall into you—We give you glory—performed by the Shekinah St.Kitts group
Playing with fall’s leaves—I need a little more Jesus—by the STARS
Fall is about colours-Fix my eyes—by SUN; MOON and STARS
Put it on the altar mix-by the United Boys
God’s promise-Standing on the promises-Shekinah dance Theater
Curtain call-Shekinah dance Theater.
Interspersed with the dance performances and the presentations by the guest artistes, Anesta Maynard and Michelle Forbes, kept the audience totally entertained and in stitches as they dramatized some of the usual church melee, as sisters competed to see which one was most holy in the sight of God and both failing miserably in the attempt.
The audience was thoroughly thrilled by the performances and their loud rapturous applause, told the story. 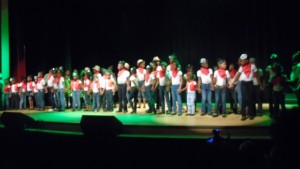 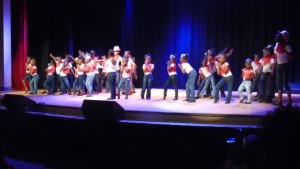 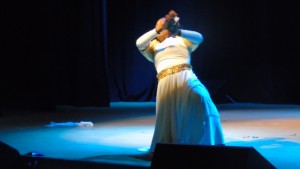