Basseterre, St. Kitts, July 17, 2019 (SKNIS): Student chefs currently attending the Clarence Fitzroy Bryant College (CFBC) in St. Kitts will soon get an opportunity to learn from Italian restaurateur, chef and cookbook author, Pino Luongo, who will be in the Federation to participate in the 5th Annual Restaurant Week, which runs from July 18-28. 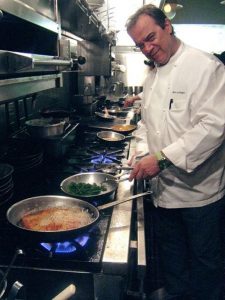 This was announced by Kathleen Pessolano, Consultant in the Ministry of Tourism, during Wednesday’s (July 17) edition of “Working for You”

“He is partnering with the CFBC to… work with some students there and doing some trainings. On Friday, they will be doing some cooking and training sessions together with students and then one student eventually would be selected to actually have an internship from the college with Chef Pino,” said Ms. Pessolano, adding that this is a capacity building component of Restaurant Week.

Chef Pino, who arrives in St. Kitts and Nevis on Thursday, July 18, is also expected to engage in a number of special culinary events with various restaurants.

“This will be very interesting. He is hosting a few special events: a brunch at Marshalls with Chef Marshall to learn from each other and cook together. Pino would be sort of using coconut with Chef Marshall to create a special brunch menu on Sunday, July 21,” she said. “On Monday, he will join chefs at Park Hyatt St. Kitts creating a US$45 special dinner entrée.”

On Wednesday, July 24, Chef Pino will be working with the team at Sprat Net in Old Road by contributing a marinade to the spare ribs. Ms. Pessolano encouraged persons to join the chef at these places to experience something different. She noted however, that the brunch at Marshalls is already sold out.

The consultant said that this is the first time an international chef will be joining the team for St. Kitts and Nevis Restaurant Week.

“So, this is something that has multiple components to it, but it is the first time that Restaurant Week has ever hosted an international chef to really roll up sleeves and get involved in the Restaurant Week activities and helping to advance the mission,” she said.

In 1983, Pino opened Il Cantinori, an instant hit in New York City’s East Village. He proceeded to garner a loyal following among foodies, celebrities, and locals in New York, the Hamptons, and Chicago with Sapore di Mare, Le Madri, and Coco Pazzo. With each additional restaurant, 16 in total, he transferred the essence of his homeland – the flavors, the landscape, the history and the culture of Tuscany to America.

Athletics : Charlestown Primary-Champions in The Federation