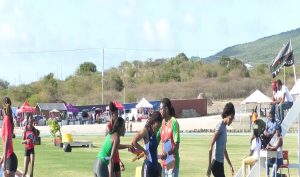 The Titans Athletics club hosted yet another in a series of relay events on Sunday 8th April. The meet was aptly dubbed the ‘A1 Athletics Club Relay festival,’ as the A1 Office Technology store in Charlestown remains the chief sponsor of the club.

This time around was even more significant because it was the first time at the Nevis Athletic Stadium aka the Mondo track.

Some five teams participated in the event: Titans; Gladiators; Over the Top; Extreme Velocity and Far Stretch. 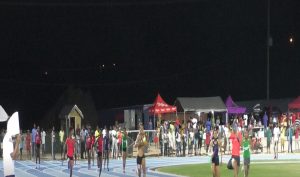 A huge and appreciative crowd was on hand to witness the event.

Prior to the much anticipated action on the track there was a brief opening ceremony ably chaired by Mrs. Nichola Parris.

Remarks were made by Mr. Dwayne Warner President of the track club who indicated that the club was extending its portfolio of sponsorship and sought the assistance of the Minister and Director of Sports and others in assisting the club. He also indicated that the festival was the fourth annual, hosted by the club.

Minister of Sports Hon. Eric Evelyn praised the Titans club for continuing to promote athletics in such a manner and noted that he is encouraging other club schools and organizations to utilize the picturesque facility, well.

Manager/owner of A1 Technology Mr. Mackie Tross used the opportunity to thank his patrons who have supported his business throughout its 17 years of existence and noted that with their continued support, his company can continue to give in like manner.

Director of Sports, Jamir Claxton, had special words of commendation for the Titans club and main sponsor, A1 Technology. He also pledged the continued support of his Department to the club, before officially declaring the meet open.

The athletes from the clubs in St. Kitts and Nevis then served to excite the vociferous crowd with some scintillating runs.

At the end of the meet the detailed results were not received but sufficing to say, the host club, Titans, came away as champions, as they topped the medal count.