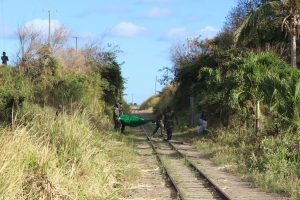 The Royal St. Christopher and Nevis Police Force in a statement confirmed the murders were under investigation.

“Both sisters were allegedly hacked to death by a young man from the Keys area. Dead are two sisters, one of them apparently the girlfriend of the perpetrator,” said the police statement.

Police disclosed that the District Medical Officer arrived on the scene and pronounced the women dead.

Officers were observed at the crime scene at the entrance of a nearby ghut, some 30 to 50 feet from the seashore.

A funeral home, with the assistance of soldiers and police officers removed the bodies individually up the steep incline to the waiting hearse.

Both young women are said to be in their early 20’s were hacked to death with one losing both hands. One is said to be a member of the St. Kitts-Nevis Defence Force and recently gave birth to a baby.

Neighbours say the victims and the alleged murderer lived in the same yard on a hill overlooking, the crime scene nearly two miles away.