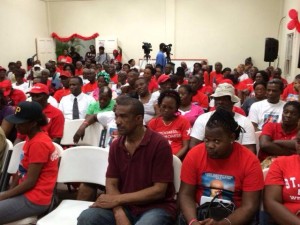 Speaking at a recent “Conversations for Progress,” Mr. Hamilton said that the life of the five-person Commission lasts from the time of its appointment until the dissolution of the St. Kitts and Nevis National Assembly.

He used the opportunity to further explain, the recent ruling of the High Court Judge, and referenced earlier statements on the matter by Prime Minister the Right Hon. Dr. Denzil L. Douglas at the Town Hall Meeting at the New Town Community Center.

“The Prime Minister started at the right point in indicating that the constitution requires or indicates that the boundaries in each constituency should be as closely aligned in terms of the number of inhabitants as possible. He has indicated what the disparities are in relation to that and so as a result of that, the (Constituency) Boundaries Commission set out in 2012, having appointed the Chairman to do its work to satisfy the requirements of the Constitution.

Now, when the Chairman was appointed as indicated, there were no objections to the Chairman being biased. However by the time we got to 2013, there were some allegations that there were bias on the part of the Chairman and they described him as an activist,” said the Attorney General.

“The Prime Minister mentioned three grounds in which the case came to the court, but actually there were more grounds that the Opposition alleged the government was responsible for. One of the grounds they alleged was that the government was trying gerrymander the boundaries. The Court very early dismissed that and found that there was no evidence of the government trying to gerrymander. Additionally, another one of the things that they tried to say, that the Commission was involved in was that again the Chairman was biased because they described him as an activist. The court dismissed that allegation as well and found that there was no evidence of bias,” said the Attorney General, adding:

“At one point in the judgement, the Court says that the Chairman was eminently qualified to act as Chairman and that the Boundaries Commission undertook its work in a diligent fashion.”

The Attorney General noted that another allegation that was made, was that the Boundaries Commission took into account information that they ought not to have taken into account and used a census report that was preliminary in nature.

“The court found that again the commission acted properly and acted as a diligent commission ought to have acted,” said Mr. Hamilton.

He said the only issue that was really outstanding was the question of the thoroughness of the consultation.

“Now the life of the Commission lasts from when the appointment is made until Parliament is dissolved, as the Prime Minister indicated, that is not due until 2015 approximately. I know that the Chairman has been diligently working to try to put the commission back to meeting to do what it has to do. How that would transpire remains to be seen, but the only issue was consultation so once the commission rectifies that state of affairs, however they decide to rectify that state of affairs, one can presume that the report would then be laid before the house again once it’s to do that,” said Mr. Hamilton.

He was quick to point out that never before in the history of St. Kitts and Nevis had an Electoral Boundaries Commission met and invited members of political parties to give their input as to how they say the boundaries being aligned.

“This was the first time that was done in the history of St. Kitts and Nevis and the Commission should be commended for attempting to be as fair as possible in this venture. Not everything in this world is perfect and so we are all guided by the Court. The Court found some errors in the way that the consultation was done but for the consultation, the court had also found that the Commission did everything that a proper Commission ought to have done so that is something that takes away from the Opposition saying that the Commission tried to use the process as a means to gain a political advantage for the ruling government,” said Attorney General Hamilton.

“So I know a lot is being said on the radio in relation to gerrymandering,” said the Attorney General.