Biggest political demonstration in St. Kitts in over 40 years

Basseterre, St. Kitts, Tuesday 25th June, 2013, (PAM Communications Unit) – Not since 1971, when the opposition PAM party staged a protest march against then Premier Robert Bradshaw, has the island of St. Kitts witnessed a political demonstration like they did on Wednesday 26th June, 2013, when over 5,000 citizens took to the streets of the capital to demonstrate that they no longer have confidence in the government of Prime Minister Dr. Denzil Douglas.

On 11th December, 2012, four elected parliamentarians in the country’s National Assembly, namely Hon. Shawn Richards, Hon. Eugene Hamilton (of the People’s Action Movement, PAM), Hon. Mark Brantley and Hon. Vance Amory (of the Concerned Citizens Movement, CCM), filed a motion of no confidence in Douglas. The 4 Opposition parliamentarians were joined by two Senior Government Ministers, former Deputy Prime Minister Sam Condor and Senior Minister Dr. Timothy Harris in writing to the Governor-General Sir Edmund Lawrence indicating that they do not have any confidence in the leadership of Dr Douglas. The letter officially declared that an elected majority of 6 parliamentarians of the 11 elected parliamentarian in the National Assembly do not support Dr. Douglas and his administration. Despite this, now six months after, he has refused to allow the motion to be heard in the Assembly.

But on Wednesday thousands of citizens, many of whom have never opted to public protest before, responded to the call of the leader of the People’s Action Movement, Hon. Shawn Richards, and turned out to help send a strong message to the Prime Minister and his Labour Party Government, that indeed his time was up, and that the people had enough of him, and are demanding that he steps aside. 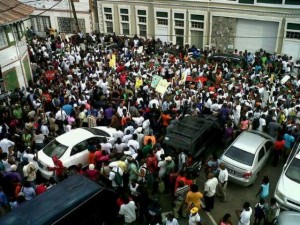 At a Press Conference the day before, on Tuesday 25th June, Richards told the media and tens of thousands listening via radio and the internet, that the police had no right and legal grounds on which to deny his party the right to march as they had informed the police commissioner, what they intended to do, in a letter of 29th May, 2013.

Richards maintained that the country’s constitution was the supreme law of the land and it provided them with the fundamental rights of expression, assembly and movement.

He therefore was very defiant Tuesday when he said that never mind what the commissioner and government said, he intended to exercise that democratic and sacred right, and he urged his followers to join him. Apparent Richard’s message was powerful enough to convince over 5,000 people to come out and demonstrate that the time in office for PM Douglas was over.

Richards said at the end of the march that, “they said we could not march. I told you no matter what, we will march and today, look at what we have done, we have certainly done what we said no one would stop us from doing.”

Richards for weeks had also used his platform speeches to drum up support but many are crediting his remarkable presentation at his PAM press conference on Tuesday, for really convincing the thousands to turn out.

What is certain is that the turn out of the march must be of great concern to the prime minister and his government. Earlier in the day, at his own press conference Douglas had tried to throw cold water on the march and said that PAM would not even get 500 people, but with the massive show of support, he must be now wondering how soon his regime would fall.