The VOJN Primary School’s ground was the venue for an exciting match on Sunday 10th February.
On that day, the Masters’ Cricket team of Nevis hosted its first in several fund raising events, towards their championship defense in the Leeward Islands Masters’ Cricket tournament, which will be held in Antigua this year.
Carl Tuckett won the toss and elected to bat first. 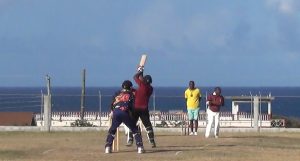 The pitch immediately came under close scrutiny, as the first ball from Gerard TRINI Charles, virtually crept along the turf, from the time it touched down and had Junior DUNCAN Mills, trapped LBW, for a one ball duck.
Thereafter, there were no real major scares and the Tuckett’s X1 eventually got to a commanding 160 for 7 from their 20 overs.
The two stand out batsmen, were Virge Browne, with a superlative half of a ton and Skipper Carl Tuckett, who remained undefeated at the end with a controlled 39.
The main bowler for the Joel Simmonds team, was Vellie Maynard, with his 3 for 24.
When the Joel Simmonds team batted, they started enterprisingly, with Colin Mills, promptly dispatching a Wendell Wallace delivery, into the school yard for a maximum, but when Curtis Morton Sr was bowled by the same bowler for 1, attempting the selfsame shot, the slide started.
Batsmen went to and from the pavilion in a regular procession and it was only the experience of Captain Joel Simmonds and Derrick Parry, that took the eventual total to some semblance of respectability—97 for 9 in the end.
Summarized scores: Carl Tuckett’s X1: 160 for 7 from 20 overs:

At the end of the match, the Masters’ cricketers joined in a practice session of a song for the upcoming funeral service of one of their fallen heroes-Teddy BLACKMAN Liburd, which may have caused the nearby residents to think that the Brooklyn Tabernacle choir, was on island.