Basseterre, St. Kitts, 25th June, 2013, (PAM Communications Unit) – Evidence has been produced that the Commissioner of Police in St. Kitts and Nevis has all along been colluding with the government to intimidate and bring harm to citizens simply because they demand their constitutional rights and freedoms. 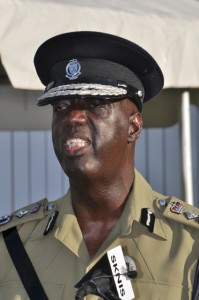 At a press conference on Tuesday morning at the Ocean Terrace Inn, Leader of PAM, Hon. Shawn Richards, told the nation that the government is now planning to use the security forces against the unarmed and peaceful citizens of the country.

“And we of the People’s Action Movement note the threats to lock up and jail our citizens because they seek to exercise their democratic and constitutional rights,” stated Richards.

“But we urge the leadership of the police force and defense force, not to allow themselves to be dragged into an obvious campaign to take our country further down the path of dictatorship,” he pleaded.
Richards reminded the police that it is their job to protect the rights of the people, not to suffocate them.

“Fellow citizens, we have come across evidence which confirms that the police leadership is colluding with the politicians. The following correspondence has been brought to our attention…please listen carefully to the contents of these emails between the Commissioner of Police and his most senior ranks”:
(Commissioner’s email)

No march permit was granted. Persons are not to be permitted to congregate on Church Street. Do we have plans in place to counter these INSURGENTS? Has anyone contacted Cpl. (…) regarding the less lethals? Have we been training with the less lethals? What is the plan that is in place? I am not hearing from anyone except…

Where is the rest of the operational arm of law enforcement?
DCP Liburd what plans are in place for mass arrest? Inspector David please refer to ACP Queeley all press questions until I return to Federation.

“Effective leadership is not about making speeches and being liked; leadership is defined by results not attributes.” (Peter Drucker).

(Here is the response to the commissioner from one of the senior ranks):
Myself and the DCP discussed the issue this morning and I have certain directions from him. I spoke with (…). Last week regarding availability of IS gears and equipment and he informed me that they are available and the SSU has been training regularly.

A meeting with all department head is scheduled for 2pm tomorrow with the DCP to discuss this development.
“Fellow citizens those are the emails between the commissioner and his most senior officers. Now you see the conspiracy that is taking place between the police and the politicians,” stated the People’s Action Movement leader.

“We are also reliably informed that the commissioner was very angry with his senior ranks and told them that he is NOT a citizen of St. Kitts and he does not care what happens here so it is their (senior ranks) decision.”

Richards explained that the top cop was angry at his senior ranks because they told him that they do not agree with his course of action and that he should reconsider his decision but he told them that the decision was out of his hands because he had referred the matter to Astona Browne and Jason Hamilton.
The commissioner revealed to his men that specific instructions were received from the Attorney General, Jason Hamilton, not to arrest the PAM leaders, and the PLP leaders but that certain PAM supporters were to be arrested, said Richards at his press conference.

Richards was however firm in his conviction when he said “…we hold no fear in the desperate actions of any dictator, nor are we afraid of any ‘police state’ because as so many other dictators and tyrants have seen, the world is watching and the international court of justice is waiting.”

In a direct message to Prime Minister Douglas, Richards stated “I remind you of the many dictators like you who once thought they too were big and bad, until the international court of justice caught up with them for genocide and crimes against humanity. Your day of judgment is coming!”

Richards also made an appeal to the security forces when he said, that “members of our police force are our fellow citizens. They too have brothers, sisters, mothers, fathers, sons, daughters, aunts, uncles, nephews, nieces, cousins, girlfriends and boyfriends in the society at large. Are these police men and women willing to shoot down their own families? Will they allow themselves to be duped into doing the “dirty work” of an expired Prime Minister? I do not think so…”

Cricket : Highlights 1 Edges All Stars in Super Over Heart Stopper