The Nevis Historical and Conservation Society (NJCS) will mark Earth Day by hosting a public lecture which will be delivered by an international environmental consultant, Kevel Lindsay, from Antigua.
The lecture will be held at the St. Paul’s Anglican Church Hall at 7 pm. Sponsors are Joan Robinson Memorial Fund, UNDP/GEF and the St Kitts and Nevis Government. 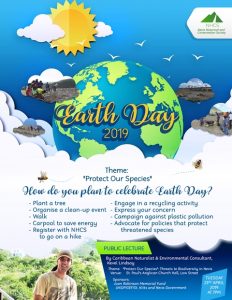 Policy and decision makers and practitioners in various fields such as agriculture, fisheries, tourism, environmental health, protection and physical planning are encouraged to attend the lecture.
Mr Lindsay is a trained forester and biologist. He was regional coordinator of the Eastern Caribbean Biodiversity Programme of the Island Resources Foundation for 15 years and is very familiar with the natural history of St. Kitts and Nevis.
Mr. Lindsay is an expert on Caribbean plant ecology and faunal species, particularly birds and bats and was a principal contributor to several key biodiversity planning documents prepared by the Foundation, including vegetation classification systems for Antigua and Barbuda, St. Kitts and Nevis, and the U.S. Virgin Islands.
Earth Day, April 22 has been celebrated annually since 1970 to raise awareness of the threats to the natural environment caused by human activity, particularly the impact of industrial development. It is now a worldwide event that attracts millions of people.
The theme for Earth Day 2019 is “Protect our Species”, in recognition of the threat of extinction facing millions of species around the world. The balance of nature in which each life form has a vital role to play has been disastrously upset by humans.
In Nevis, our biodiversity is being gravely eroded by invasive species, climate change, pollution and pesticides, deforestation, destruction of wetlands among other types of human generated damage.
Invasive species such as vervet monkeys, Cuban frogs and lionfish along with roaming livestock are wiping out many of our indigenous species while rampant and careless use of backhoes and excavators has ravaged our landscape causing wide spread habitat destruction for bird, bat, fish, amphibian and insect species.
The lecture’s objective is to raise awareness of these critical threats to plant and wild life in Nevis as a first step towards decisive, collective, sustainable action to avert an ongoing disaster.
During his visit to the island, Mr Lindsay will also lead a nature hike for interested persons. Paid registration for the hike may be done at the NHCS.