When you would have thought that the 2019 edition of the Gulf Insurance Interprimary Sports meet, was the grand climax of the athletic term, the Little Stars Nursery, situated at Victoria Road, had other ideas.
Theirs was the final sports meet for the term, held at the school’s grounds, on Friday 12th April. 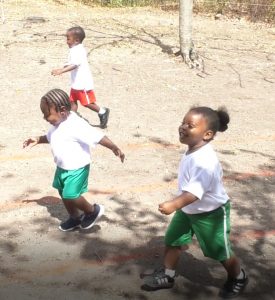 It all commenced with an impressive march past, with the little tots making some tremendous strides and then the on track action got on the way.
The children competed in races such as flat races; lime and bucket; undress races (a race in which the children put on T–shirts and ran to set marked area, where they had to remove the T-shirt unassisted and race back to the finish line); bag races; shoes races and more.

All this to the shrieks and screams of the overjoyed parents.
The parents also added to the excitement, with races of their own and helped to give the specific house that they were supporting, some well needed points.
When the dust settled, the final results were: