Charlestown, Nevis – December 3, 2019: There was an atmosphere of joyful celebration for the launch of a new After School Advantage (ASA) Centre during a ribbon-cutting ceremony at the Maude Crosse Preparatory School in Charlestown recently. The ASA Centre, consisting of 11 computers and two printers, will provide the school’s 123 students with the opportunity to access the digital world, as a vital resource for the important after-school hours. 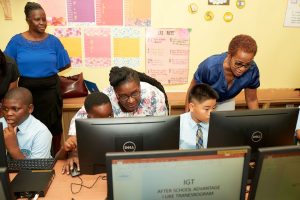 Representatives of IGT Antilles, including the Caribbean Lottery, joined the principal, students, staff and members of the Parent Teachers Association for the happy occasion.

Guest speaker Margaret Stevens lauded IGT Antilles’ ongoing support for digital learning in the region, describing it as an essential component in the educational landscape. Stevens has been a practicing Clinical Dietician for over 20 years, working at the Alexandra Hospital in Nevis for two years. Born and raised in England, Stevens began serving as a volunteer at the St. Christopher Children’s Home in St. Kitts in 2011 and as Administrator from 2013 until her retirement. The St. Christopher Children’s Home in Basseterre is the site of an ASA Centre which opened in July 23, 2014 and is sponsored by the Caribbean Lottery’s parent company IGT.

General Manager of IGT Antilles Patrick Clunis expressed his delight at the opening of the ASA Centre – a “first” on the island of Nevis. The ASA Centre on its sister island of St. Kitts was opened at the St. Christopher Children’s Home in Basseterre in 2014. “This is a very special occasion for us at IGT Antilles. It is the 40th ASA Centre IGT has opened in the English-speaking Caribbean,” Clunis said.

He added that ASA Centres were dear to the hearts of all at IGT Antilles, representing the company’s commitment to technology as a vital tool for the development of young people across the region. The purpose of ASA Centres is to provide access to information technology that might otherwise be beyond their reach, especially in the critical after-school hours when students must focus on their homework.

“At IGT, we strive to bridge that ‘digital divide’ that still exists in the Caribbean and elsewhere through the establishment of ASA Centres,” noted Clunis. He expressed the hope that the students would make full use of the facilities in Maude Crosse’s newly upgraded computer lab, pointing out to them: “We will keep in touch with you, as we do with all our ASA Centres. This is a part of IGT’s commitment to you. We want to be sure that the new computer lab is properly equipped and maintained, and we hope you will also take care of it.” He wished the students every success and urged them to take full advantage of the computer lab to conduct research and explore new horizons of study and interest.

The Maude Crosse Preparatory School was established by Ms. Maude Crosse in 1977. Students from pre-school to Grade Six work toward achieving the motto “Endure to Succeed” and are encouraged to reach their full potential.

December 07 is Budget Day in Nevis