Leslassa returns to “her home away from home”

Leslassa Amour-Shillingford will grace the stage at the Nevis Cultural Complex for one more time, on Monday, August 4, Emancipation Day.

The Dominican beauty, who last year became the third Dominican (the most by any country) to win the prestigious Ms. Caribbean Culture Pageant has had a busy year and will perform duties for the 9th staging of one the Caribbean’s marquee cultural events, and centerpiece of Nevis’ Culturama (C40) celebrations. 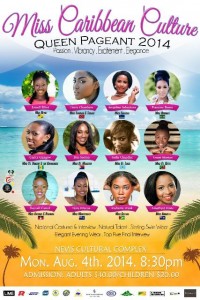 The brainchild of Nevisian businessman and restaurateur Randy Jeffers, the pageant has this year attracted participation from 12 countries around the region. Delegates begin arriving this weekend and will be Nevis’s Friday night hot spot, Lime Beach Bar.

Reflecting on last year’s event, Leslassa said: “I often say that the Ms. Caribbean Culture was one of my more difficult regional pageants because many of the contestants were pageant veterans, whereas I had only began competing that year (2013). I was proud to have won this title and continue to be proud because of what I have accomplished.”

This will be Ms. Amour–Shillingford’s second visit to Nevis since copping the coveted title.

“During my reign I was able to return to Nevis and meet with the different sponsors to show our appreciation to them for helping to create this fantastic event. Sponsors of these pageants are so important and the Ms. Caribbean Culture Committee does an excellent job in ensuring that the sponsors feel appreciated.”
She said she also visited some of Nevis’ hot spots such as the Nisbett Plantation Inn, the Caribbean’s only plantation resort set on a beach, and formerly the property of the family of Fanny Nisbett who married British naval hero Admiral Horatio Nelson in Nevis in 1787. She naturally dined and hung out at LIME, one of Nevis’ top beachside restaurants, owned by Pageant CEO and Organizer Randy Jeffers.

“I truly got to see and feel the Nevis vibe and share it with my friends around the region through my pictures and stories.”
In between shuttling between Dominica and Nevis, Shillingford has been kept extremely busy during her year of reign.

“After arriving back in Dominica I was told that in 3 weeks I would travel to Indonesia to represent Dominica at Ms. World.” It was the first time in 35 years that the Nature Island was represented at the world event. She said she gained the opportunity having won 3 regional titles, the third of which was Ms. Caribbean Culture.

“”It was amazing to get so much support from across the world and be voted third place for the People’s Choice Award. From a field of 128, I was among 16 chosen to do the Opening Ceremony Indonesian Fan Dance, and was one of the two dance leaders.”

Shillingford was selected among the top 12 finalists for the World Talent Competition, and placed seventh with a dance portraying Child Abuse in Ballet en Pointe.
“It was an incredible experience”, Shilingford said.

Shillingford is also extremely proud of her various platforms.

They include – Breast, Cervical and Prostate cancer, Domestic Violence, and Rural Women and Development in Education.

She has also been the face and voice to promote Dominica and the region as the Caribbean Youth Ambassador for the Institute of Peace through Tourism; Dominica’s “Bring a Friend” and “We are just next door” ad campaigns, the UNICEF/OECS Innocence Project and Break the Silence Campaign, and initiatives in Antigua and Dominica to raise awareness about Child Abuse.

During her reign she also worked with her main private sector sponsor, the Anchorage Hotel Whale Watch and Dive Center.

“These are just a few of the moments in the spotlight which I hope made a difference in the region.”

“It is easy for a young woman to be caught up in the groundswell of expectations as a Caribbean Queen with the number of critical issues facing our economies and communities. I would like to be remembered as someone who stands firm in my commitment to use my titled roles to influence different thinking, bring awareness to causes and a consciousness and respect of and for each other. This experience opened many avenues for me to excel, and therefore I tried to engage in many opportunities that came my way whether at home, regionally or internationally. I hope I will be remembered as someone whose voice was, and will continue to be heard with urgency that demands immediate action.”

Shillingford plans to matriculate at Waterloo University in Canada in September, where she will be a student in the Honours Co-op Sustainable Planning Program focusing on Rural Development. She will couple her first degree with a law degree focusing on Environmental Law.

“Later, after I have completed some international experience, I hope to return to the Caribbean and give back to the society that raised me.”

But in the meantime, the multi-talented, multi-dimensional Dominican lass, who won the hearts of the judges and the Nevisian public approximately one year ago, will be returning to her “home away from home” to host the newest version of the Ms. Caribbean Culture Pageant.