(CHARLESTOWN, NEVIS)- The Charlestown Secondary School is taking a ‘zero tolerance’ approach to students who have decided not to abide by the school uniform policy. 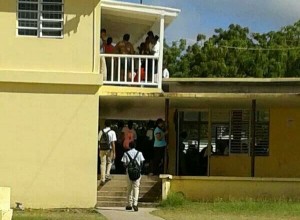 On Monday, February 3, 2014 about 30 students from Forms 1 to 5 of the Charlestown Secondary School (CSS) were sent home after failing to wear the school’s crest correctly.

Principal of the school, Mr. Edson Elliot told this media house that the decision was made after giving students numerous chances and demonstrations on how the school’s crest should be worn.

The Principal indicated that the crest is a part of the school uniform and the school’s attire is important since it reflects the school’s discipline standards. As a result it should be worn appropriately at all times.

Mr. Elliot stated that on Friday, January 31, 2014 during the morning Assembly proceedings, he informed the gathering that on Monday, February 2, 2014, all crest should be sewn on and not attached to the shirt with a pin. According to the principal, pins maybe used as weapons and they are therefore prohibited.

He further stated that on Monday, a number of students were sent to him by their class teachers. These students were either without a crest or their crests were attached with pins. Here, Mr. Elliot indicated that the students received a second chance. The students were allowed to leave the school premises and return within one hour with the crests sewn onto their shirts.

Some parents went onto Facebook to vent their frustrations about the decision the principal made on Monday morning. One mother posted ‘so many parents have to leave their jobs to go to CSS for their kids that have been suspended over a crest, doesn’t Elliot has anything better to do?’ While others mentioned that it is not every parent that can afford to buy more than one crest. Others disagreed and stated that rules are rules.

To this, Mr. Elliot stated that “uniform will always be uniform and it cannot be worn any old way”. He further stated that the school’s crest has always been a part of the school uniform and a part of the school rules. He is asking parents to comply with the school rules and to have the crest sewn onto the school shirts. According to Elliot, the decision was made for the safety of the children and also to eliminate confusion. He referred to situations where students would borrow someone else’s crest when they are caught without their crest.

In conclusion he stated that the crest is sold for a mere $5.00 E.C.