Charlestown-Nevis-They were vivacious and hilarious. The seniors of Nevis, were certainly in their element on the evening of Thursday 10th December.

That was the night when the Social Services Department, Seniors’ division, hosted its annual seniors’ Christmas concert.

The official venue for the prestigious event, NEPAC was almost packed to capacity and the audience got very involved from the outset.
The event started with prayer by Miss Kathy Tyson and the singing of the national anthem by all present.

Welcome remarks were delivered in an enthusiastic manner by Pastor Eunice Griffin and Mrs. Kim Singh introduced the MCS for the evening.
Included in the audience were: Premier and Mrs Amory and they were later joined by Permanent Secretary in the Ministry of Social Development, Mr Keith Glasgow, who offered brief remarks, during which he praised the Seniors Division and the seniors themselves for continuing to produce such programs of excellent quality. He also took time out to wish all and sundry, a blessed Christmas and a prosperous new year.
Then the real action commenced.

The seniors excited the audience with group songs which ranged from old time favourite hymns to Christmas carols, all with a unique twist and tone, under the superior guidance of Mrs Deslyn Williams.

Some of them also mesmerized the audience with their astounding memory, in poetry. Miss Annie Brandy surely took the cake with her alphabet of the bible, when she used the alphabet to enunciate various characters, events and places, as it relates to the bible. Others delivered traditional poems, with the usual curtsy and bows and generally filled with aspects of humour.

Another unforgettable feature was a dance which was coordinated by the dynamic Deslyn Williams and the seniors amazed everyone present with their demonstration of energy and synergy.

If the audience thought they had had their monies worth, they were in for another surprise.
The skit was arguably the featured presentation for the evening and the star was Ms Elvina Webbe who acted as an individual who at Christmas time had nothing to eat and was hungry, but encouraged by her neighbour who was also ‘broke,’ to pray to God, later received many blessings in money and food supplies. This one definitely left the audience in stitches.
Some in attendance may even argue that the ‘BAZUD BOYS,’ which interestingly comprised of only one male, also stole the proverbial cake. Their performance was exhilarating and surely brought the house down!

The host and hostess for the event, Mr. Roger Fyfield and Mrs Adella Meade, also kept the audience lively with their sense of humour, giveaways and the addition of some dramatic poetic presentations by Mrs. Meade.

The event which commenced at 6.48 pm concluded with the vote of thanks by Ms Ruth Thompson, at around 10.48 pm.

It was a long but exciting night and commendations must go out to Coordinator of the Seniors Division, Mrs. Garcia Hendrickson and her team and manager of NEPAC, Mrs. Deslyn Williams and her team for working so beautifully with the seniors to make it such a memorable night for all. 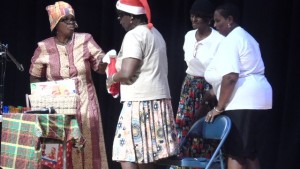 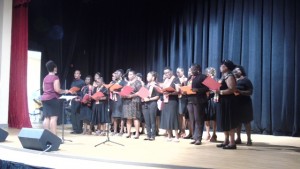