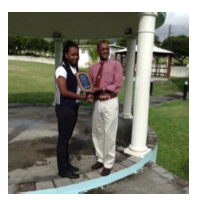 Focused on its motto, “Empowerment through educaon”, the organisation continues to give back in significant ways.

The group endeavours to motivate current students and recent graduates of their alma mater to pursue greater academic goals. This has become even more evident in the three awards that SPBS has recently instituted.

For the past 15 years, SPBS scholarships have been eligible to the best students being admitted to the high school in Sandy Point. Now, the focus has been extended to motivating those graduates of the school.

The first of the new scholarships is dubbed the ‘SPBS College Scholarship Award’. This award was launched last year and was eligible to any alumnus of SPHS/now CEMSS who is currently pursuing baccalaureate level or masters level studies.

Mrs. Sharine Hodge, a locally certified primary school teacher, is the first recipient of this award which provides an injection of US$1000.00 aimed at assisting in her educational pursuits during the 2013 – 2014 academic year. Mrs. Hodge is currently majoring in Elementary Education at Cameron University where she is completing a Bachelor’s degree.

SPBS looks forward to Sharine’s successful completion of her studies, her return to the federation to assist with community development, and her efforts to enhance the quality of education being delivered in the federation.

SPBS’ genuine support of education also saw two other awards being introduced. The two awards are eligible to Principal Award recipients who produce exemplary results at the end of their stint at the Charles E. Mills Secondary and the Clarence Fitzroy Bryant College respectively.

Former Principal of the Sandy Point High School and current Vice President of SPBS, Mr. William Hodge stated, “intent of these awards is to serve as an incentive for CEMSS students who receive the SPBS Principal’s Award to continue on a path of academic excellence.”

Ms. Zonique Brown received the award for exemplary performance by a Principal Award’s recipient at the end of form 5 of the Charles E. Mills Secondary School. Zonique attained passes in 11 CXC-CSEC subjects with distinction in 9. The award presented to Ms. Brown consisted of a cash prize of US $400.00 and a plaque. Zonique Brown was the recipient of the SPBS SANDY POINT BENEVOLENT SOCIETY 231-10 LINDEN BOULEVARD JAMAICA, NY 11411 FROM THE OFFICE OF THE public relations officer (267) 664-2394 stewart.williams@spbsinc.org or stewartwilliams@dow.com
Principal’s Award in 2008. 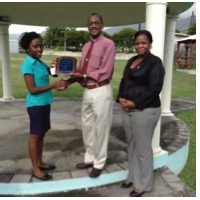 Ms. Dolphin’s award entails a plaque and a cheque for US$500.00. Jelees was the recipient of the SPBS Principal’s Award in 2006. 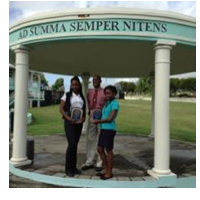 Both Jelees Dolphin and Zonique Brown received their awards during a simple but profoundly meaningful ceremony that was held at the Burdon Street campus of the Clarence Fitzroy Bryant College. 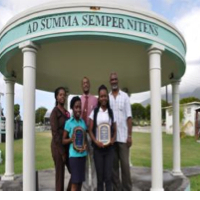 Ms. Dolphin and Ms. Brown were commended for their outstanding performance and encouraged to keep the college motto, Ad Summa Semper Nitens-Always striving for excellence – as their personal motto in their respective fields.

New Payroll System to be Introduced to the Civil Service of St. Kitts and Nevis