The message was straight forward and simple: ‘If you want to succeed in life, you have to focus on your education. Stay in school; study hard and do your best not only at the sports of your choice but also at your school work’. 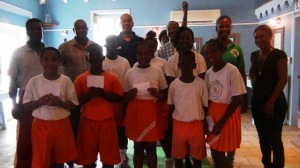 This was the general theme of the messages delivered by four of Nevis’ finest sporting sons and daughters on Wednesday 10th July, 2013 at the 3rd annual Nevis Sports Museum week continued.

They spoke passionately to some of the students from the Charlestown Primary School and later took time out to meet with them personally and sign autographs.

Masefield Nisbett, who is also the National Physical Trainer, also took time out to play a game of concentration with the children, telling them that whether it is in their academics or sports, they need to learn to focus and concentrate. This exercise was well received by the children.

Thursday 11th July is expected to see the most traffic at the Sports Museum as no fewer than three schools are expected in to meet with Body Builder, Colin Lazarus and former Nevis and Leeward Islands speedster, Mickey Mills.

Friday 12th will be a day dedicated to the memory of deceased heroes such as Tesril Nisbett and Cicely Grell Hull. Persons are also invited to bring donations to add to the Museum’s collection on that day.