(CHARLESTOWN, NEVIS)- Party lovers outside of a popular Charlestown night club were startled during the early morning hours of Saturday, June 22, 2013 when loud gunshots were heard coming from the nearby Elquemedo T. Willet Park area.

Later it was revealed that a young man was shot and killed in the park. Dead was 22 year old Adrian ‘Mac 1’ Springette of Bath Village.

Information reaching this publication is that the deceased was attacked while walking home sometime after 2:00 a.m.

Springette has been in trouble with the law in the past. He had being arrested and charged for building breaking, larceny, possession of cannabis, and possession of an offensive weapon. His most recent charge is said to have been for the breaking of an office in the Heritage Plaza, Charlestown.

Nevispages visited the crime scene this morning and officers were still on the scene processing and analyzing the area.

This media house also learnt that five (5) persons are currently in police custody assisting with the investigation. 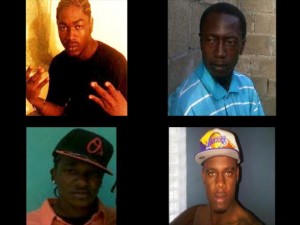 The gun battle in Nevis started on New Year’s morning, January 01, 2013, sometime after 5:00 a.m. when 22 year Alex ‘Indo’ Claxton of Bath Village was gunned down at Pinney’s Beach. He was shot multiple times to his body and succumbed to his injuries at the Alexandra Hospital.

In the same month on January 26, 2013 sometime after 10:00 a.m. Rudolph ‘Smokey’ Browne of Rawlins Pasture was gunned down while working at Monkey Rock in Gingerland.

Four months later Nevis recorded its third murder. This murder was that of 29 year old Kishmoy Challenger. He too was gunned down on his job site at Cliff Dwellers on the morning of Tuesday, May 14 sometime after 8:00 a.m. Kishmoy was rushed to the hospital where he succumbed to his injuries about nine hours after his attack. The assailants used his vehicle to make an escape from the scene. Some 12 days after the missing village was found in Gore Hill in the Fountain area.

The fourth murder was that of a young female who attended the Nevis Sixth Form College. The victim was later identified as 18 year old Chazere Davis of Taylor’s Pasture. An autopsy has confirmed that she was strangled to death at her home on the evening Monday, May 20, 2013. Her alleged attacker was later found by police at his residence in a semi-conscious state with what appeared to be self-inflicted wounds to his body. He was since charged and remanded to Her Majesty Prison for murder.

Hours after the death of Chazere, Nevis recorded its fifth murder. Dead was 21 year old Jamal ‘Jim’ Isles of Fountain Village. Jamal was gunned down in his bedroom in the early morning hours of Tuesday, May 21, 2013. Nevispages was reliably informed that four gunmen dressed in black clothing came to the residence of Jamal. The assailants knocked on the door and identified themselves as police. The grandmother of the deceased responded by knocking on Jamal’s bedroom door and informing him that police was outside. At this time the assailants kicked the front door in and as Jamal opened his bedroom door two of them opened fire on him while the other two remained outside. Reports indicate that he was shot five times about the body.

Twenty-two days after the murder of Jamal, the community of Spring Hill was shaken up after 23 year old Denrick ‘Bluff’ Hanley was found dead at the side of the road on Tuesday, June 11, 2013. He was gunned down sometime prior to 8:00 a.m. while doing his duties by cutting the grass at the side of the road. It is alleged that he was shot in his head.

Anyone who has any information pertaining to these incidents is asked to call the CID on Nevis or Crime Stoppers at 1-800-8477. The information will be confidential, and anyone with information may be eligible to receive a reward.