(CHARLESTOWN NEVIS)- The Department of Physical Planning on the Island of Nevis has issued notices to persons with unauthorized businesses on Pinney’s Beach to cease operations and to remove the structures from which they operate. The structures were to be moved by May 14 and 15, 2013. 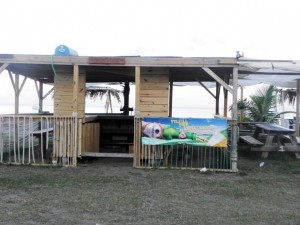 This media house has learnt that several persons have been building structures on the beach without the permission of the Department of Planning and operating as beach bars on the sand.

During an interview with an employee at the Department of Physical Planning, this media house was informed that those structures are not allowed to be placed on the sand. They indicated that there must be a certain amount of space between the coastline and any erected structure.

The  employee at the department stated that the beaches on the island are the main factors that attract tourists and operations in those areas. Consequently, illegal activity cannot be overlooked on the beaches, no  the beaches neglected.

According to the employee at the Department of Physical Planning, “If we at this department are  not strict on those persons seeking to occupy prohibited areas of the beach, who will?’ the employee said that the department has always sought to be fair with the general public and to go about its duties in the best possible way.

Physical Planning has made an appeal to those persons with unauthorized businesses on the beach and who have received notices, to comply and to have those structures removed as soon as possible or else face the ramifications.

When this media house visited the site on Thursday, May 16, 2013 the structures were still in place.