Birthday Celebration for Elquemedo Willett at the Charlestown Primary School

(CHARLESTOWN NEVIS)- The Charlestown Primary School joined the rest of Nevis in saluting West Indies cricket legend Elquemedo Tonito Willett on the occasion of his 60th birthday on Wednesday, May 01, 2013 at the school’s auditorium. 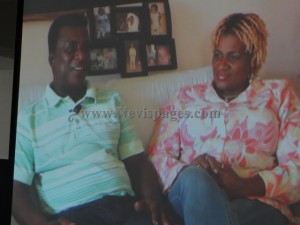 The ceremony began with the children singing Happy Birthday to the maestro, who in returned jokingly said he was 16 years old.

Willett who started coaching in 1980 once had the burden of coaching all the schools on the island but has since been stationed officially at Charlestown Primary since 1997. Over the years, schools he had coached have won a number of championships in various sporting activities.

However, Willett stated that there is no more coveted prize than that of the Gulf Insurance Mini Olympic meet. He said that the event attracts more people than all the other sporting activities on the island combined and the joy of winning it is always overwhelming.

Local Sports Journalist Mr. Steve Manners attended the function and gave a few remarks in which he highlighted the genius of the man. He said Willett epitomized the dreams and hopes of Nevisians, during his illustrious career and personified excellence wherever and whenever he played. Manners stated that not only did Willett accomplished what seemed to be unattainable at that time by being the first Nevisian and Leeward Islander to make it to the West Indies team, but he did it at a very tender age.

Manners noted that former West Indies captain Sir Frank Worrell distinctively said before his passing that in order for the Caribbean team to be a continuous force the selectors will have to cast their eyes in the smaller territories. Manners continued that ‘Today we can proudly say that a man from the tiny island of Nevis broke the barrier for small island players and made his contribution to that success’.

Principal of the institution, Mr. Kevin ‘Scoobie’ Barrett presented a cake on behalf of his staff and wished the former West Indies cricket star many more birthdays to come. Barrett said, ‘You are looking in tremendous shape, and we here at the Charlestown Primary School are fortunate and grateful for the hard work you have implemented over the years and today we commend you for your efforts’.