Special Olympians Off To Abu Dhabi

The time is finally here.
After months and months of planning and preparations, the Special Olympians of St. Kitts and Nevis, are off to the world games in Abu Dhabi. 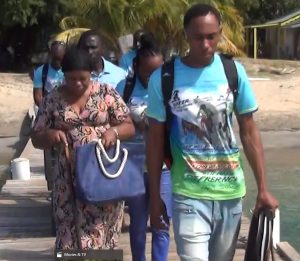 Just prior to leaving for St. Kitts to join their counterparts from the sister island on Wednesday 6th March, the Nevisian representatives of the federation’s team, received a warm sendoff from Minister of Sports, Hon. Eric Evelyn.
Minister Evelyn pointed out that his Ministry and by extension, the Nevis Island Administration, has always helped the special Olympians and stated that it was a pleasure for him and his Ministry to assist them in getting tickets to their destination, this time around.
He asked them to give of their best and bring back many medals.
The brief ceremony was chaired by Mrs. Violet Clarke, Headmistress at the Cicely Browne Integrated School (CBIS).
Also offering brief words of commendation, was Director of Sports, Mr. Jamir Claxton, who referred to the athletes as AMBASSADORS and asked them to conduct themselves as such.

Mrs. Judy Paris –Rawlins, chairperson of the Nevis Special Olympics committee and assistant head of delegation for the world games Abu Dhabi, used the opportunity to allow the athletes to introduce themselves:
Jamor Merchant-Cycling
Shakir Stapleton-Tennis
Lavander Forbes-Bocce
Shane Nisbett-Cycling
The other athlete, Robert Liddie, has already travelled, as his sport of Triathlon, will commence earlier than the others.
The athletes and Mrs. Parris, later boarded the POINT ROYAL water taxi, at the Oualie Beach and headed off to St. Kitts.
It is understood that they were in for a lengthy flight, before they could get to their final destination.