Shareholders of the St. Kitts-Nevis Anguilla Trading and Development Company Limited (TDC Group) met at the Fisherman’s Wharf in Basseterre, on Thursday 4th September 2014, for its 41st Annual General Meeting. 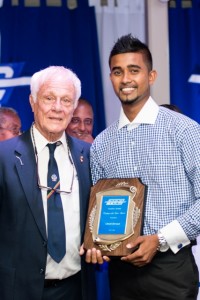 The new Chairman, Mr. Earle Kelly, presided over the gathering and was ably assisted by Mr. Ernie France who presented the Directors Report, which provided a detailed overview of the Company’s performance for the 2013/14 fiscal year. The Group reported a Net Profit Before Taxation of EC$8,141,831.00 compared to EC$5,128,366.00 in the previous year.

In addition to hearing directly from the Board, the investors received the Auditors Report, from Grant Thornton, and voted to declare a dividend of four cents per share, making a total pay-out of EC$2,080,000.00.

Thereafter, the Chairman announced the retirement of Director, Mr. Kenneth ‘Ken’ Kelly, who has given twenty-six (26) years of yeoman service to the Company. The chairman used the opportunity to openly acknowledge his outstanding contributions and extended heartfelt appreciation to him for his dedicated service and wise counsel that he rendered over the years. In gratitude for his stewardship, Mr. Kelly was presented with an award by Ms. Maritza Bowry, the Company’s Chief Financial Officer (CFO) and Company Secretary.

In response, the humble entrepreneur expressed his pleasure in being able to serve at the Board level with pride since 1988. He noted, with confidence, that the Group continues to be in good hands under the current leadership, and assured those in attendance it is on the right path to continued prosperity. 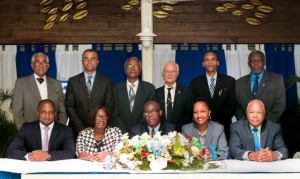 Immediately following the close of the business session, employees were recognised for ten, twenty, twenty-five, thirty, and thirty-five years of dedicated service with commemorative pins and Corporate tokens.

One of the other highlights of the evening was the presentation of awards to outstanding employees, which included the coveted TDC Jacques A. Cramer Award.

Shareholders were not left empty handed, as many of them also had the opportunity to win a variety of Corporate gifts from the Company and its partners. The evening’s proceedings came to a close on a good note, following another successful year of business, during which significant contributions were made to advance several Community and Social ventures.