U.S. diplomat died ‘doing what she loved’ in Afghanistan

But the public diplomacy officer for the U.S. Embassy in Kabul was always pushing to get out.
“We thought she was relatively safe in the embassy compound, but as it turned out, Anne really wanted to do a lot more,” her father, Tom Smedinghoff, told CNN on Sunday. 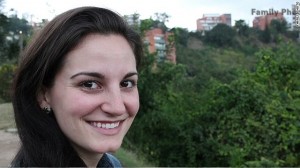 “She was always finding projects and assignments that took her outside to the various provinces within and around Afghanistan, and that was what she wanted to do. That was what really drove her.”

Kerry: Smedinghoff believed in change Young diplomat killed in suicide attack Kerry mourns U.S. Afghan envoy
He said his daughter relished the opportunity to work directly with the Afghan people and that she volunteered to go to Kabul because she felt there was “a lot of good she could do there.”

This weekend, the 25-year-old was trying to do just that — delivering books to a school in southern Afghanistan — when a suicide bomber smashed into her convoy Saturday. She is believed to be the first U.S. diplomat killed since the September attack in Benghazi, Libya.

Her death was a grim reminder of the risks and importance of pushing for change in “one of the toughest places on earth,” U.S. Secretary of State John Kerry said Sunday.

It was an “extraordinary, harsh contradiction,” Kerry said, to see an attacker kill “a young, 25-year-old woman with all of the future ahead of her, believing in the possibilities of diplomacy, of changing people’s lives, of making a difference, having an impact, who was taking knowledge in books to deliver them to a school.”

Officials did not say who they believe was behind the blast. But Kerry offered a sharp condemnation of the violence as he spoke Sunday to U.S. diplomats stationed in Istanbul.

“The folks who want to kill people, and that’s all they want to do, are scared of knowledge. And they want to shut the doors and they don’t want people to make their choices about the future. For them, it’s ‘You do things my way and if you don’t, we’ll throw acid in your face. We’ll put a bullet in your face,’ to a young girl trying to learn,” Kerry said. “So this is a huge challenge for us. It is a confrontation with modernity, with possibilities, and everything that our country stands for, everything we stand for, is embodied in what Anne Smedinghoff stood for.”
Friend: ‘She pushed you to be better’

Smedinghoff graduated from Johns Hopkins University in 2009 with a degree in international relations and joined the Foreign Service soon afterward.

“I remember how excited she was when she got in and started her training. She would always talk about it, because she was one of those natural leaders,” said Christopher Louie, 26, a close friend who first met Smedinghoff in college. “When she was passionate about something, she would let everyone know. … You could just tell when she got in the Foreign Service, she saw that this was her opportunity to make a big impact on the world.”

And her enthusiasm was infectious, said Louie, a medical filmmaker in Washington who recently vacationed with Smedinghoff in Jordan.

“She always got people interested in what she was involved in. … Whenever I knew I was going to see her, I’d always make sure I was brushed up on foreign affairs. She was one of those people, you didn’t want to let her down,” he said. “She pushed you to be better.”

Kerry laments death of U.S. civilian in Afghanistan
It was clear that “there was no better place for her” than the Foreign Service, her parents, Tom and Mary Beth Smedinghoff, said in a written statement.

After a tour of duty in Caracas, Venezuela, Smedinghoff volunteered for an assignment at the U.S. Embassy in Kabul and had been working there since July, her parents said.

“We are consoled knowing that she was doing what she loved, and that she was serving her country by helping to make a positive difference in the world,” they said.
Before she joined the State Department, Smedinghoff served on the board of directors for the Ulman Cancer Fund for Young Adults’ 4K for Cancer program, spending a summer cycling across the United States to raise money and awareness.

“Anne was an incredibly optimistic, fearless, and giving person,” said Ryan Hanley, the program’s founder
“We mourn a life cut short,” he said Sunday, “but are blessed to have shared in it.”
Father: ‘I think she really enjoyed the challenge’

Smedinghoff’s Facebook profile gives a glimpse of her life in Afghanistan. One photo shows a group skiing in the Afghan mountains. Another shows her standing behind a lectern at the embassy, surrounded by American flags. Another, titled “Helicoptering around Helmand,” shows a smiling Smedinghoff sitting beside men in camouflage, wearing a helmet and a flak jacket.

He said she did a lot of public outreach work, helping to organize educational efforts in schools and working with women’s groups to promote equality.
Tom Smedinghoff spoke on his way to Dover Air Force Base, where his daughter’s body is expected to arrive on Monday.

On Easter, her father told the Chicago Tribune, she excitedly talked about Kerry’s recent visit.
“She sounded so upbeat and so positive and so excited about all the work she’d been doing,” he said.
Kerry was emotional Sunday as he spoke of Smedinghoff’s death. He said that they met two weeks ago when he visited Afghanistan.

“I remember her — vivacious, smart, capable, chosen often by the ambassador there to be the lead person because of her capabilities,” he said.

Neighbor: ‘She had candle power’
Residents in the River Forest, Illinois, neighborhood where the Smedinghoff family lives said they were devastated by the news.

“Anne Smedinghoff was one of those rare people who, you were lucky if you were near her. She had candle power,” one neighbor told CNN affiliate WGN. “She brightened everyone’s life.”
Katie Whiting, whose sister was Smedinghoff’s best friend, told the CNN affiliate that the “beautiful and brave” diplomat was doing her dream job.

“The world has really lost somebody who was going to do a lot of good things. … Every dangerous place she wanted to go there, because that’s where the hard work was,” Whiting said.
In Smedinghoff’s memory, CNN affiliate WBBM reported, American flags lined the road near her family’s home on Sunday.

A large photograph she posted on her Facebook profile less than three weeks ago shows another road on the other side of the world, lined with Afghan flags.
CNN’s John Branch and Rick Martin contributed to this report.